Kwon Won Il has yet to register back to back ONE Championship wins. It is a situation the Korean is anxious to address as he prepares to take on Shoko Sato in Manila.

The two featherweights face off at ONE: ‘Fire & Fury’ next week. Kwon is significantly less experienced than his Japanese opponent and knows he has an uphill task ahead of him at the MOA Arena,

“Shoko Sato is a veteran with a long track record both at ONE Championship and elsewhere and I know he is a powerful opponent. He is certainly one of the most skilled opponents I have been matched against, but I believe I can defeat him.”

Kwon has seen one weakness in his opponent that he plans to capitalize on,

“He is a well-rounded athlete. His footwork, movement, takedowns, and strikes are impressive, but I believe I’ll be able to cut off his flow and use that to my advantage. I noticed his footwork is not 100% efficient. That, I think, is his weakness.” 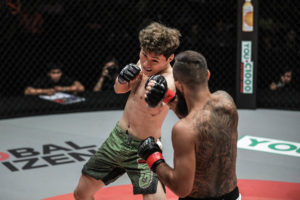 The Korean comes from a taekwondo background, like so many of his compatriots. But it wasn’t until he discovered MMA that the 24 year old really started to embrace the routine of training and competing,

“Taekwondo was just a hobby for me. There is nothing wrong with taekwondo, but I felt there was limited room for me to grow. After I got a taste of mixed martial arts, I became hooked.”

However, as you would expect from a fighter with a background in taekwondo, Kwon says he is still more comfortable on his feet,

“My striking is my strength and I’ve been sharpening my skills so that I can be faster and more effective than my opponent. I’m always looking to knock my opponent down, but I intend to spend some time first sizing up my opponent’s moves. I think the sparks will start flying once I’m done with that.” 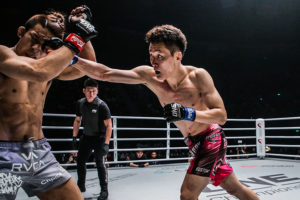 Kwon fought five times last year, winning three of those bouts. The busy schedule suggests ONE Championship matchmakers have seen something they like in the Korean.

He also tasted defeat for the first time in 2019. He was submitted by Masakazu Imanari and dropped a decision to Koyomi Matsushima after a forgettable three round fight.

Despite these setbacks Kwon has fond memories of the year. In 2020 he looks set to compete in the bantamweight division and is not short of ambition,

“Last year was a chance for me to strengthen my foundations. In 2020, I’d like to rise higher and aim for the title belt.”

He’s been taking steps to ensure he can become a top contender in the weight class currently ruled by Brazilian veteran Bibiano Fernandes,

“I’ve stepped up my workout regimen, bolstering weight training as well as my grappling and striking skills,” he said. 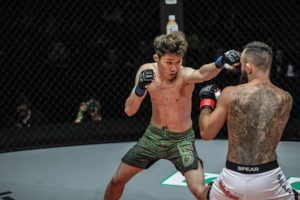 Kwon holds stoppage wins over Sunoto, Eric Kelly and Anthony Engelen. If he wants to make that title talk realistic the Korean knows he needs to beat an opponent in the upper echelons of the bantamweight division.

Sato is riding a five fight winning streak that culminated in a second round stoppage over reigning Pancrase 135lbs champion Rafael Silva at ONE: ‘Century’ last October. The Japanese fighter is clearly a top contender in the bantamweight division.

Kwon knows he is the underdog coming into their match in Manila. But a win would thrust him straight into the title picture and the Korean is determined to silence the doubters by scoring the biggest victory of his career,

“Each match is very important to me, but this one is particularly significant because I think everyone expects me to lose. I want to prove them wrong and get a step closer to the title match.”

Fabricio Andrade thinks he should be fighting for the belt (Video)