The featherweight division is undeniably the most talent-rich weight class in South Korea. Chan Sung Jung, Doo Ho Choi, Seung Woo Choi and Sung Bin Jo all fought for the UFC in 2019 but Lee Jeong Yeong is adamant that he is the best 145lber in the country.

The 24 year old is the reigning Road FC featherweight champion and believes he is better than any of the other Korean featherweights,

“When I honestly evaluate myself, I haven’t shown my full potential. When the time comes, everyone will see and understand I am the best.” 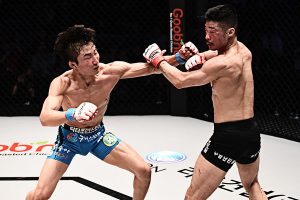 Nine out of ten

This mindset has been cultivated over the space of several years competing with Road FC. Lee has spent his entire career with the Korean promotion, winning nine fights out of ten.

He also avenged his only career loss and has held the Road FC featherweight title since 2018.  His most recent title defence lasted just ten seconds.

At Road FC 55 he faced former teammate and bitter rival, Park Hae Jin. Many felt the title challenger would pose problems for Lee but he successfully defended his belt after finishing the fight with a straight right hand just seconds into the opening round,

After fighting just once in 2019 Lee had hoped to be busier this year. The coronavirus, or Covid-19, has disrupted his plans but he says he is ready to return as soon as the crisis subsides,

“I am injury-free and continuing to stay in great shape,” Lee said.

“I have been managing my weight and paying so much attention to my diet. I’m ready to fight at any time.” Lee’s hometown of Daegu was at the epicenter of the original outbreak in South Korea in February. Hundreds of new cases were being confirmed daily and a state of emergency was implemented.

Most of the local population stayed home and practiced social distancing but Lee says he was able to continue training,

“I didn’t have a big problem,” Lee said.

“I trained with people who were tested and came back negative. And I spent more time doing my own personal training. Like always, I have been working on my striking and jiu-jitsu. The only difference is more emphasis on getting stronger.”

Functional training has been a big part of his regimen since his last fight. Finding the weak points in the body and strengthening those areas has become somewhat of an obsession for the 24 year old.

“I still have a lot of things to develop in my body. And the more I exercise, the more I am determined to gain strength. So I always look forward to training and working harder.” 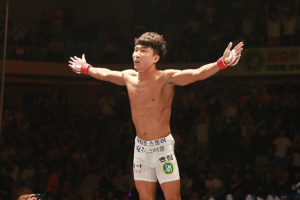 Road FC 58 was scheduled for April 18th in Incheon. Once the government requested the suspension of all indoor events that card was postponed.

The promotion is still hoping to hold a fight card in June. But whatever the future holds, Lee wants to get back to fighting as soon as possible.

Finding a suitable opponent could be difficult. He doesn’t see any suitable challengers on the current Road FC roster,

“There are no fighters who can compete with me on the Road FC featherweight roster. Many of them are a long way from a title shot. They are not at my level.”

With no contender in mind, heading over to Japan could be a possibility.

The proposition of holding two titles for two different organizations simultaneously would be alluring to most fighters but his ambitions lie elsewhere.

“I do not want to go to Japan and fight for Rizin. I’m only thinking about the UFC. I am ready to go to the UFC right now. I want to prove that what I said in the past was not out of arrogance. This is all I can think about.” 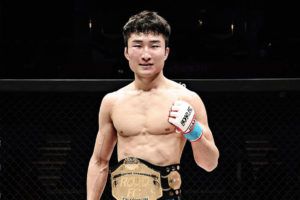 Although Lee has made it clear that there are no worthy challengers he is willing to face whoever Road FC puts in front of him. The Korean says he will defend the title as many times as he has to until the UFC comes calling with a contract.

Once restrictions are lifted and shows can resume without complications, Lee is planning to add the missing piece to his training camp.

“Moving forward, when I sign a fight agreement, I plan on going abroad to prepare. Right now it is undetermined where I will go.”

In order to take his career to the next level Lee thinks he will need to train in another country,

“At the moment, there are no fighters in Korea that can rival me in training. I will be competing against foreigners so I want to experience training with them. Evaluate my skills against them without ego and grind to better myself. This will make me stronger and tougher.”

His 9-1 record compares favourably with any other Korean fighter. Road FC champions Yui Chul Nam and Kyung Ho Kang have both gone on to compete in the octagon and Lee is desperate to follow in their footsteps by signing with the UFC.