Chan Sung Jung is determined to put on a spectacular show for the crowd in Busan this Saturday no matter who he is up against.

The former featherweight title challenger was originally penciled to face Brian Ortega in the main event of UFC Busan. A knee injury to the American means he will now duke it out with ex-lightweight champion Frankie Edgar at the Sajik Arena instead.

Jung only found out the identity of his replacement foe nearly two weeks ago but it does not seem to bother him,

“For me, it wasn’t much of an adjustment. I have fought the toughest fighters in this division and in the UFC, and in preparing for Brian Ortega, my training was really hard. When I was told that he was injured, I still continued my training to stay ready,” he said through his translator. 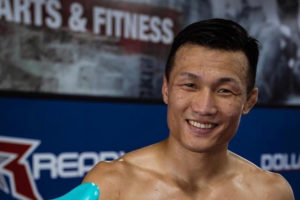 The 32-year-old Pohang native is glad that Edgar took the bout on short notice as it meant his weeks of rigid training would not go to waste,

“I am happy he stepped in because I want to showcase what I’ve worked for in the gym. I became explosive and more powerful, so I can defend against my opponent even if he takes me down, or in a stand-up battle. I don’t mind,” he stated.

‘The Korean Zombie’ believes he has improved significantly during the course of this camp,

“I have made my weaknesses strong by training, and I’ve also sharpened all aspects of my game. I am a more complete fighter now,” Jung added. Jung will need to be at his best to defeat Edgar, who looks to place himself back on the winning track after suffering a unanimous decision loss to Max Holloway in a featherweight title fight at UFC 240 this past July.

Known for his sharp boxing combinations, Edgar is a 39% accurate striker. His footwork and head movement let him cut angles and unleash punching combinations, which permitted him to stand toe-to-toe with elite-level athletes like BJ Penn, Gray Maynard, Benson Henderson and Jose Aldo during his heyday.

Meanwhile, his success rate in scoring takedowns is 47% courtesy of his NCAA Division I background and BJJ black belt pedigree. Edgar has excellent chain wrestling ability that allows him to drag his counterpart to the ground even if his first attempt is stuffed.

Jung discussed the importance of making necessary adjustments during a fight when things do not go according to plan,

“I know what his capabilities are. It’s no secret. I think we can still use our game plan against Ortega in this fight against Edgar. Our match is in mixed martial arts, so it will be unpredictable. If my game plan doesn’t work, then we’ll have to adjust and adapt,” he explained. There is plenty of footage of Edgar out there but Jung knows it will be important to adjust and adapt during the actual contest,

“We have to be ready for anything because there are times that the game plan works, and times when it doesn’t, so the most important thing for a fighter is to be able to adjust depending on the situation,” Jung continued.

Though he expects Edgar to have a few tricks up his sleeve in their five-round encounter, Jung guarantees that he will have an answer for everything that comes his way,

“I am prepared for any kind of situation in a fight. I expect both tough and good situations. That’s why people love to watch me compete. This one will be no different.”