Liam Harrison wins at Road to ONE

Muay Thai Grand Prix hosted a Road to ONE event in London on Saturday. Chatri Sityodtong was in attendance to see Liam Harrison beat Brayan Matias.

The event took place at the Indigo at O2. The main event saw an already established ONE Championship fighter in action with with local legend Harrison facing French veteran Matias.

It had been a frustrating year for Harrison as he tried to return to the ring, but saw several pull outs and injuries holding him back. In the opening round he started patiently, attacking the legs of Matias with hard low kicks and looking to test his chin with his patented left hook. 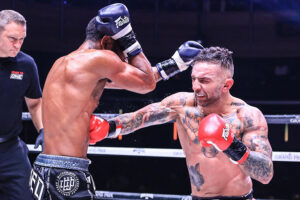 The young French fighter looked determined though and attacked Harrison back with some sharp hooks and low kicks off his own. Near the end of the round the Englishman started to up the tempo and looked like he stunned Matias at one point with a hard left hook.

Harrison kept up his attacks on Matias’ legs in the second round and the shots appeared to be having some effect as the French fighter started to switch to southpaw. He kept in the fight though and started to push forward in the second half of the round, attacking the local favourite with strong kicks and punches.

In the final round Matias showed his gameness again as he pushed forward, but Harrison looked slick and controlled the ring well. Towards the end of the round he fired in a fast spinning back elbow that dropped the French fighter for an eight count ensuring a unanimous decision win. 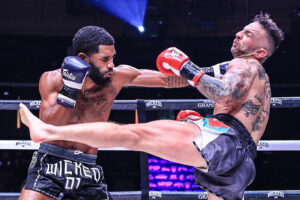 Another fighter signed with ONE Championship, albeit yet to make her debut, was in action with Iman Barlow facing Sveva Melillo for the Muay Thai Grand Prix bantamweight title. In the opening round it looked like it could be an easy night in the office for the ‘Pretty Killer’ as she looked strong and sharp.

In the second things got more interesting as a large swelling formed under Barlow’s eye which rapidly grew. Melillo looked to try and work and target the area with some hard punches and by the end of the round it looked in danger of closing up.

Barlow’s corner did a great job in-between rounds though, working to try and keep the swelling under control. Melillo kept pushing forward, but Barlow’s experience proved to be too much to overcome as she controlled the ring with good footwork and sharp kicks and solid knees to take a clear decision win at the end. The Road to ONE four man heavyweight kickboxing tournament provided plenty of action. Rhys Brudenell was the winner, knocking out both his opponents.

He finished Alan Zomkowski in the semi-final fight and found himself facing Romanian/Italian Cladiu Istrate in the final. It was an explosive back and forth match and the Englishman took some punishment but was able to drop his opponent twice with the referee calling off the contest in the opening round. 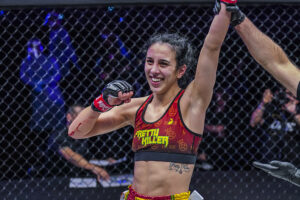 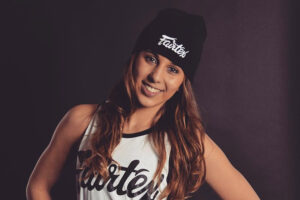 Iman Barlow wants to make up for lost time