Lin Heqin has won her last 11 fights and the Chinese atomweight is looking to extend that streak at ONE: ‘Battleground’ this Friday. She has been matched with Ritu Phogat and doesn’t want to waste any time finishing the famous Indian wrestler,

“I want to knock her out as soon as possible. That’s my strategy.”

While Heqin is looking to derail her opponent’s career by handing Phogat a second straight loss she is still inspired by her opponent’s life story. The 27 year old has watched the movie Dangal and it gave her a lot of empathy for the Indian and her family,

“I learned her story from that movie, and it’s a very touching movie. It really moved me. After the movie, I cried a lot because we are all fighters. I know she is a very famous wrestler, and her family, they put a lot of hard work into wrestling.” 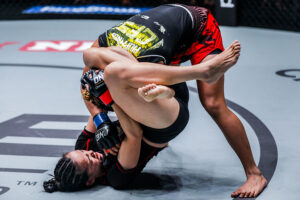 It sounds like Heqin’s research on Phogat has gone well beyond just watching fight footage. So she knows exactly where her opponent’s strengths lie,

“Ritu has a very obvious advantage. She is a tremendous wrestler. She is really good at takedown techniques, and she has very powerful double-leg takedowns,” Heqin said.

Heqin believes Phogat is making progress with her striking but is adamant that her standup skills are superior,

“I see Ritu’s improvement on her striking power. She got heavier and heavier striking power after all these fights in ONE Championship, but I have to say, I’m a much more powerful striker than Ritu.” 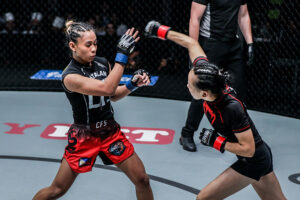 Heqin has been training with a fighter who knows all about winning streaks. Zhang Lipeng will face Eduard Folayang at ONE: ‘Battleground’ Part II and he once won 16 fights in a row.

The two have been training together and Heqin says the UFC veteran has been helping her with her takedown defence,

“I was doing my training camp with Zhang Lipeng, the new signee of ONE Championship. He’s a good guy. We had a lot of fun during the whole training camp. I have learned a lot from him. He showed me a lot of grappling skills and a lot of takedown defence.” 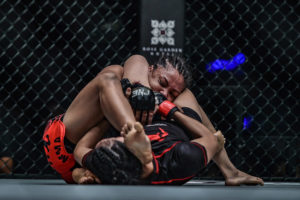 The status of the atomweight Grand Prix remains unclear after the cancellation of ONE: ‘Empower’. Heqin wasn’t selected to be the Chinese representative in that tournament but she does want to earn a title shot as soon as possible.

Champion Angela Lee is tentatively scheduled to return by the end of the year and Heqin feels her recent form is so good that another win would leave her in pole position to challenge the champion,

“My incredible winning streak before did all the talking so I think I got the power to go directly to challenge Angela Lee to get the belt.”