Lito Adiwang ready for anyone after successful ONE debut

Lito Adiwang burst to prominence with ONE Warrior Series. He earned his shot on the big show and seized the opportunity with a stoppage victory over Senzo Ikeda on Sunday.

The Filipino strawweight’s 10-2 record compares favourably with just about anyone in the division. He’s riding a six fight winning streak and can already consider himself a top contender.

The win against Ikeda was somewhat fortuitous. The Japanese veteran appeared to suffer an arm injury but for Adiwang all that matters is the result,

“I feel very happy. I (am) content because I delivered what I came here to do and got the victory.”

Ikeda has been on the scene for a long time and was one of the top strawweights on the Pancrase roster before signing for ONE Championship. Adiwang feels a win over an opponent of this calibre represents a feather in his cap,

“I know he’s a tough opponent. He’s a hometown hero, but I’m here to win. I prepared hard for this, so I came, and I conquered.”

There are no shortage of contenders in the strawweight division. Former champion Yosuke Saruta was among the big winners at ONE: ‘Century’ while his compatriot Yoshitaka Naito is very much in the mix.

There have already been some big ‘Philippines vs Japan’ matchups at strawweight but Adiwang admits he doesn’t have his eye on any particular opponent,

“Anyone given to me, I’ll accept, and I’ll prepare for it. Let’s go. But for now, I’m still new in ONE, so I’ll just wait for who they’re going to give me.” 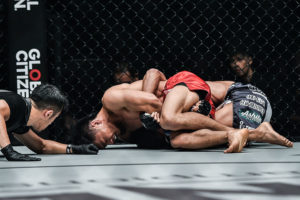 It wasn’t the best week for Team Lakay. Jerry Olsim, Kevin Belingon, Honorio Banario and Danny Kingad all lost, making Adiwang the only winner from the Baguio based camp.

He says he has benefited from the experience of Kingad who beat Ikeda in a flyweight fight last year,

“Danny gave some tips on how strong Senzo Ikeda is, how heavy he is, and how to control him,” he said.

At ONE: ‘Masters of Fate’ Adiwang’s teammate Joshua Pacio will be defending his strawweight belt against compatriot Rene Catalan. The 25 year old wants to fight for this belt eventually,

“I want to be the champion in ONE.” A win for Catalan would open up the possibility of Adiwang becoming a title contender, although there are a couple of Japanese strawweights entitled to feel they should be ahead of him in the queue.

Kingad and Eustaquio have both stated very clearly that they will never fight each other. A matchup with Pacio isn’t on Adiwang’s radar either but he is in a hurry to establish himself as the top contender,

“For now, I’m not thinking of it (a fight with Pacio). If the moment comes then we’ll deal with it but for now we got a lot of good competitors in my division, so let me deal with them.”