This year started well for Lito Adiwang but finished on a slow note. He dropped a split decision to Hiroba Minowa at ONE: ‘Inside the Matrix’ Part III earlier this month.

It was a far cry from January when he finished Pongsiri Mitsatit with a kimura at ONE: ‘Fire & Fury’ that is sure to be in the conversation when the ‘submission of the year’ awards are handed out.  That was Adiwang’s seventh straight win and he is determined to reach these heights again in 2021,

“Fans should watch out for my next fight. I plan to bounce back with an impressive win, and remind everyone why they should keep an eye on me,” he said. 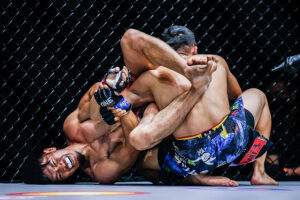 Adiwang got fights in before and after the pandemic. Under the circumstances he has been fairly active and says he learned a lot this year,

“Expect a better, stronger, and wiser ‘Thunder Kid’ next time. Definitely, surviving and learning from all the challenges and setbacks that came my way, both in and out of the circle, has made me a better person, a better fighter,” he said.

Those lessons went beyond the realm of martial arts. But Adiwang is in a positive frame of mind as he reflects upon a ‘challenging’ year,

“2020 has taught me a lot of lessons, some good, some bad. Nevertheless, I consider it all worthwhile experiences. It has definitely been a challenging and colorful year for me,” said Adiwang.

He remained active all year and says that going 11 months without a fight was a disappointment,

“The biggest lesson I learned was to be prepared for any and all situations. I practiced a lot, hoping for a lot of positive things. However, the opposite happened and I was unprepared. It was a bit hard for me to handle.”

Having fought three times in 2019 the 27 year old did not welcome the break. He wants to stay busy and hopes next year will give him the opportunity to do that,

“I want to be more active in 2021. I want to have as many fights as possible, and I want to get back in there again quickly. My goal will always be to become a world champion. That has never been more clear to me than now.”

While the loss to Minowa was a major setback Adiwang remains in the upper echelons of the strawweight division. There are plenty of big fights out there for him and he will be looking to get back to winning ways as early as possible in 2021.

Joshua Pacio smashes Yosuke Saruta in under a round!