For Loma Lookboonmee the hard work never ends. The process of transitioning from Muay Thai to MMA and from atomweight to strawweight is never ending.

She will be making her fourth octagon appearance at UFC Vegas 25 this weekend but the Thai says she is taking nothing for granted,

“I make sure to bring my best to every fight and show everyone what I’m made of. I train hard for every single fight, I don’t take anything for granted I train hard and when I got the contract renewal I was ecstatic.” 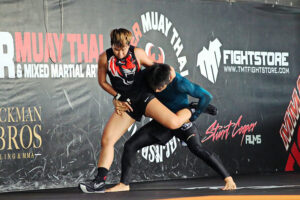 Loma, who faces Sam Hughes in Las Vegas on Saturday night (local time) has come a long way in a very short space of time. She trains full time at Tiger Muay Thai in Phuket but is still a relative newcomer to the sport,

“I didn’t know what the UFC was or what MMA was until I was on the national team and training at a gym in Bangkok. Kaitlin Young came and asked me ‘do you want to fight MMA?’ and at at that moment I discovered MMA.”

Loma made her pro MMA debut at Invicta 27 in the US. Her career trajectory has been steep and less than two years later she found herself signing for the UFC. She didn’t even know what the UFC was a few years ago. But since signing with Invicta and gaining a more sophisticated understanding of the MMA world she has always wanted to compete in the famous octagon,

“After signing with Invicta I learned that the UFC is the largest fight organization in the world and from that moment I knew it had to be in it.”

The UFC has yet to really gain a foothold in Loma’s native Thailand. She is the first fighter from the country to ever compete for the promotion and it is an achievement the 25 year old is understandably proud of.

She feels a sense of patriotic pride every time she steps inside the octagon and Loma is grateful to all the people who have helped her on her MMA journey,

“It means the world to me to be representing Thailand on such a big stage and I want to thank everyone who has been part of my journey for getting me here today.” 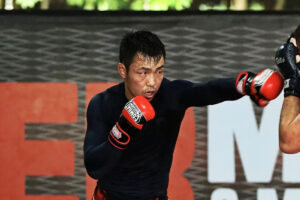