Everyone knows that it is not easy to make a living out of Muay Thai in Thailand. But it is much tougher for female fighters like Loma Lookboonmee who earn a fraction of the amount their male counterparts do.

So signing an extension to her UFC contract earlier this year was a huge moment for Loma,

“I am very happy to sign the UFC contract, I want to be a UFC champion. It’s difficult to make a living out of fighting in Thailand for everyone and it’s even more difficult for women. Having this UFC opportunity has really motivated me because I want to help my community and bring pride to my country,” she said. 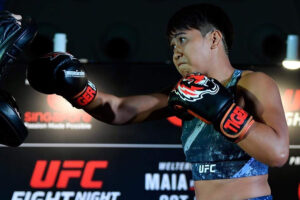 She can expect to earn more from a single fight than some Muay Thai fighters will in their entire career. Loma has reached the pinnacle of the sport and is making sure that people in her home province of Buriram are also benefitting,

“It has definitely changed my life for the better when I go home people come to meet me at the airport and everyone I go people know who I am and I am able to give some donations to try and help the community.”

As well as being in a better financial situation Loma has also gone through some big physical changes. The UFC does not have an atomweight division, so in order to compete for the promotion the 24 year old has had to bulk up,

“Before I fought at 48kgs but I actually weighed 47kgs because I didn’t understand about strength and conditioning. Today I am 60kgs.”

The coaching team as Tiger Muay Thai has overseen her development, both from a physical and a technical perspective. Loma is coming off a win over Jinh Yu Frey at UFC Fight Island 4 and says she had to start training for this bout in Buriram,

“I had to train at home to begin with because the provinces were shut so I couldn’t come to Phuket but as soon as Thailand opened up I flew to Phuket. It did affect my training a little bit but I worked hard to make sure I was ready.”

The normally bustling tourist island of Phuket is extremely quiet. But the fight team at Tiger Muay Thai continue to train together every day and Loma is staying active while she waits for a call from the UFC.

Coming from such a strong Muay Thai background she is extremely confident in her striking. But Loma sees this as an opportunity to work on the other areas of her game,

“I don’t know when I will be fighting so at the moment we are working on my weaknesses and trying to improve. I’m not preparing for anyone specific, just working on becoming more well rounded.”