All eyes will be on Singapore this Friday when Marat Grigorian makes his promotional debut on ONE: ‘Big Bang’. Regarded as one of the best kick boxers on the planet, he faces Russia’s Ivan Kondratev in a featherweight fight.

Grigorian is the current Glory lightweight champion. He is also a K-1 World Max and Kunlun World Max tournament winner who has beaten the likes of Sittichai Sitsongpeenong and Superbon Banchamek.

But it hasn’t always been this way for the Belgium based Armenian. He almost turned his back on the sport in his early 20s due to a lack of opportunities,

“It was really disappointing for me because I had no fights. I had just one or two fights in a year and it was like I was training for nothing. I wanted to fight to earn some money, but my trainer at that time told me ‘nobody wants to fight against you.’ I was really disappointed,” he recalls. 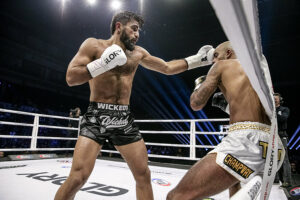 Grigorian realized that he was never going to fulfill his undeniable potential in Belgium and decided to make the move to a country with a long history of producing world class kickboxers. It was after he relocated to Holland that the Armenian’s career started to take off,

“One day, a trainer told me that I had to change my gym for it to work so I went to train at Hemmers Gym. I thought it was the last thing I could try. If this way was not enough, then I was going to give up everything and change my life. I would go to work or find myself something different. I was getting older and I had nothing in my life, so at 24 years old, I came to train at Hemmers Gym.”

The move across the border to train at Hemmers Gym quickly saw opportunities come Grigorian’s way. In 2015 he won his first major title, knocking out Jordan Pikeur in the final to win the K-1 World Max tournament. 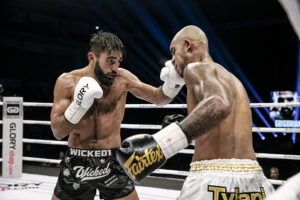 Now he has a new challenge and is delighted to join the stacked roster of kickboxers in ONE Championship’s featherweight division. He knows exactly what he wants to achieve there,

“I am happy and very motivated to fight for ONE. I have three belts in three different organizations and left them as the champion (but) there is one more belt on my mind and that’s the ONE championship belt, so I am very motivated to get that belt and stay champion for a long time.”

With several recent big name signings ONE Championship has a strong talent pool. Grigorian could end up facing former opponents like Sittichai, Superbon and Yodsanklai Fairtex but says he is happy to be matched with absolutely anyone in the division, 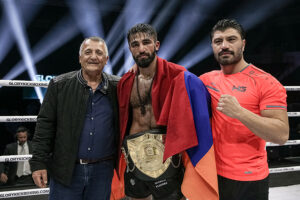 Grigorian signed with ONE Championship in August, but has been unable to fight due to the Covid-19 pandemic. After a year slight delay he is happy to be back in competitive action again,

“It was a bit harder to train at first due to the Covid-19 restrictions, but my gym and myself have a top sport status given by the government so we can do our training normally. I will be ready as always 100%.”

Grigorian’s opponent is not so well known but Kondratev is a former Russian amateur and professional kickboxing champion who will be looking to make an instant name for himself. The Armenian admits he isn’t too familiar with his opponent but is confident he will have his hand raised on Friday,

“I don’t know very much about him (but) I watched some fights of him. He is a good fighter with good skills but I think I am the better fighter and I am planning to show everyone that on December 4th.”