Miesha Tate made a successful return to the octagon after a five year absence in which she gave birth to a child. The former UFC bantamweight champion clearly likes a challenge and she has found a new one.

The 35 year old is dropping down to flyweight for the first time in her career:

Tate even has a date and an opponent for her flyweight debut. She is facing #14 ranked Lauren Murphy at UFC 272 in July.

Since making her debut in 2004 Tate has competed at both 135lbs and 145lbs. She held the Strikeforce and UFC bantamweight belts and face some of the biggest names in the division.

Tate has been in with the likes of Marloes Coenen, Ronda Rousey, Holly Holm and Amanda Nunes. At UFC Vegas 31 she made a successful return to the octagon after a five year break, stopping Marion Reneau in the third round.

There was talk that she could challenge for the bantamweight belt again but Tate’s hype train was derailed by Ketlen Vieira who beat her by decision at UFC Vegas 43. The former ONE Championship executive did not decide to give up on her title dreams though.

Instead she is dropping down in weight to challenge a a fellow veteran. Tate appears to have enlisted the help of the team at The Treigning Lab in California and to be using some scientific methods.

In the photos on Instagram she can be seen inside a cryogenic chamber and breathing through an oxygen mask which is connected to some sort of machine. Not many fighters can successfully drop down a division for the first time at the age of 35. But then not many fighters would have managed to mount a successful comeback after spending five years on the sidelines.

It is clear that Tate is capable of things that most people are not. So if she has set her sights on a flyweight title run we definitely wouldn’t bet against her! 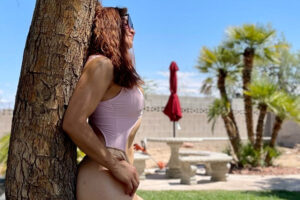 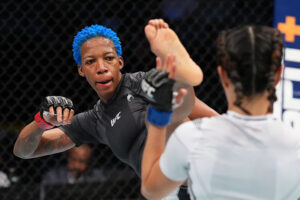