Pride: ‘Shockwave Dynamite’ attracted the biggest crowd in MMA history to the Tokyo National Stadium tonight. 71,000 fans witnessed Mirko Crocop stop Kazushi Sakuraba who was forced to withdraw at the end of the second round with a badly damaged eye.

Crocop was representing K-1 while Sakuraba was designated by Pride to headline this historical cross promotion. The Japanese fighter was given the option of fighting with a special ruleset restricting strikes on the ground but wanted to face the Croatian heavyweight in full MMA rules.

Sakuraba was making his comeback after nearly a year on the sidelines with an injury. He suffered a broken collarbone during defeat to Wanderlei Silva in a middleweight title bout at Pride 17.

Under the floodlights at the Tokyo National Stadium the two men played a high stakes game of cat and mouse. Sakuraba shot for a couple of early takedowns but Crocop, a relative newcomer to MMA, stuffed them easily.

Sakuraba looked willing to test his striking against the K-1 veteran but found himself on the receiving end of a laser like straight left. The Croatian followed up with a couple of solid low kicks to the lead leg of his opponent which was heavily bandaged around the knee area.

While the Japanese fighter was struggling to cope with the Croatian’s striking Crocop had no problem stuffing the takedowns. Every time Sakuraba shot for a single or double leg he sprawled expertly, demonstrating just how well rounded he has become since making his MMA debut a year ago.

Unable to get the action to the ground Sakuraba swarmed forwards with punches. It was a brave strategy and he did succeed in putting Crocop temporarily on the back foot albeit without doing any real damage.

With two minutes remaining in the opening round Sakuraba finally got the takedown he needed, completing a single leg. He had time to work from his opponent’s guard and looked to soften Crocop up with punches.

With the round drawing to an end Crocop used his feet to push Sakuraba away and stand up. The bell sounded seconds later but it must have been a psychological boost for the striking specialist.

The second round started slowly with both men trying lots of feints. Crocop looked the more confident and a hard low kick buckled Sakuraba’s right leg.

A double leg takedown attempt from Sakuraba was easily stuffed. The Japanese fighter seemed to be rapidly running out of ideas but was given an opportunity when Crocop slipped while landing a solid body kick.

Sakuraba was in Crocop’s half guard and looked to be trying for a kimura. It was similar to the position from which he finished Renzo Gracie at Pride 10 but the kickboxer was alert to the danger and eventually established full guard.

Sakuraba attacked with some ground and pound and landed a few hammer fists only for Crocop to spring to his feet. The local favourite took him down with a single leg just as the round ended.

Sakuraba was unable to get to his feet once the round ended and appeared to be having trouble with his vision. The 33 year old’s eye was badly swollen and it quickly became clear he would be unable to continue.

With the biggest win of his burgeoning MMA career Crocop improves to 3-0-2 while claiming a victory for K-1 over Pride. Sakuraba drops to 13-4-1 after suffering back to back defeats for the first time as a professional.

The card consisted exclusively of heavyweight fights. In the co-main event former Antônio Rodrigo Nogueira (17-3) had to come from behind to submit Bob Sapp (2-1) with an armbar.

That was a victory for Pride over K-1. But the roles were reversed when Jerome Le Banner knocked out Don Frye in the opening round of their kickboxing contest.

Pride: ‘Shockwave Dynamite!’
Mirko Crocop def. Kazushi Sakuraba by TKO (Doctor Stoppage) at 5:00 of Round 2
Antônio Rodrigo Nogueira def. Bob Sapp by Submission (Armbar) at 4:03 of Round 2
Kickboxing Semmy Schilt vs Ernesto Hoost end in a Draw (Unanimous)
Kickboxing: Jerome Le Banner def. Don Frye by KO (Right Hook) at 1:30 of Round 1
Gary Goodridge def. Lloyd Van Dams by TKO (Punches) at 3:39 of Round 1
Jerrel Venetiaan def. Daijiro Matsui by Decision (Split) at 5:00 of Round 3
Wanderlei Silva def. Tatsuya Iwasaki by TKO (Head Kick and Punches) at 1:16 of Round 1 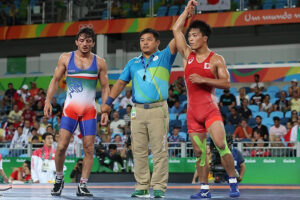