A packed crowed witnessed several of the sports current stars in action, at the 74th Rajadamnern birthday show on Monday night. The Sitchefboontham promoted event took a huge return of 6.3 million baht at the turnstiles.

The shows main event saw Yodlekpetch Or Achariya face off against Neunglanlek Jitmuangnon in a rematch from July when the latter claimed a comfortable decision win.

It was a clash of styles with Yodlekpetch looking to attack Neunglanlek from the start with heavy punches and low kicks and his opponent looking to use his height and reach to attack with spearing long knees.

As early as the second round it started to look like it could be a long night for Yodlekpetch as Neunglanlek attacked his body with knee after knee and cut him high up on his forehead with a fast elbow. 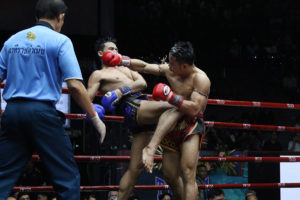 Yodlekpetch kept coming forward with ferocity but a huge knee from Neunglanlek just before the bell proved to be an ominous sign of more to come.

Neunglanlek dominated the third round, keeping close to Yodlekpetch, not giving him space to attack his legs and hammering the body with heavy knees.

Neunglanlek’s arm positioning was solid throughout and Yodlekpetch struggled to get off with more than a few elbows the entire round.

In the fourth Neunglanlek kept up the momentum for most of the round, but eased off towards the end, comfortably ahead.

This allowed Yodlekpetch to get through with a couple of punches, but nothing fazed Neunglanlek. The final round saw the former come out swinging, desperate in need of at least a knockdown.

Neunglanlek soaked up the attacks and came back at Yodlekpetch with some solid body kicks and it wasn’t long before the reigning Knockout lightweight champion conceded defeat. The co-main event saw Seksan Or Kwanmuang take on young star Rungkit Morbestkamala and the 17 year old put on a masterclass to comfortably beat the aggressive veteran.

Seksan kept pushing forward throughout, but Rungkit picked him off with sharp left body kicks and made a concentrated attack on the legs of ‘the man who yields to no-one’.

Setting his attacks up with a fast jab, Rungkit hammered his opponent’s front leg inside and out and landed more heavy low kicks to his back leg. By the end of the second stanza both Seksan’s legs were already looking red and bruised. Mid round in the third Rungkit landed with a vicious low kick that had Seksan looking hurt but this only seemed to inspire him to push forward even more determinedly, retaliating with heavy punches and elbows.

But Rungkit showed calm and poise beyond his 17 years, slipping and evading most of the punches and landing with several long knees. Seksan kept pushing forward in the fourth, but was mainly punching air as the teenager controlled the ring.

With a minute remaining in the final round the pain and frustration became too much for Seksan to bear and he conceded defeat. Rungkit claimed the decision win and is clearly at the top of the Muay Thai game heading into 2020. Superlek Kiatmoo9 put in another classy performance against Superbon Teeded99. The last time they met was in 2016 with the former winning by stoppage due to low kicks.

Superbon looked determined to avenge the loss from the opening bell, pushing forward behind some solid punches and trying to wear down Superlek in the clinch.

Superlek’s fighting I.Q. was a level above though and he always looked in control, smothering a lot of Superbon’s attacks in the clinch and landing with perfectly timed body kicks throughout.

There was a small scare for Superlek in the final round, when a hard elbow from Superbon made his knees buckle briefly but he was soon back in control and took a clear points win at the end.