Petch CPFreshmart hoping to make it 49-0 in Japan

Petch CPFreshmart is within touching distance of a perfect professional 50-0 record, but the penultimate step promises to be by far the hardest for the undefeated Thai bantamweight.

Currently holding a 48-0 record, Petch will challenge Takuma Inoue for the interim version of the WBC 118lbs belt. It is the boxer’s first time fighting outside Thailand as well as his first opportunity to compete for a world title.

I found the 25 year old in a relaxed, confident mode as he prepares for this career defining fight at the Sasakul Gym in Pathum Thani.

“I’m not really nervous, it feels like any other fight. The strongest feeling I have about this fight is determination, to really put in a strong performance and keep my record intact and keep moving forward,” he said. 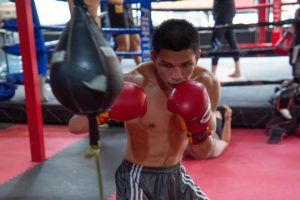 His December 30th opponent is also undefeated and happens to be the brother of Naoye Inoue, the best boxer in Asia today. Petch and his team have been reviewing some footage and the man from Roi-Et doesn’t sound too impressed.

“We have watched his fights and I am comfortable that we will get the win. I am not worried about him at all. I am sure it will be a very exciting fight for those watching.”

Petch, whose real name Tasana Salapat, had a somewhat unlikely introduction to life as a professional boxer. He started Muay Thai when he was 12 years old. He didn’t take the sport too seriously at first but he really started to focus on his fighting career after being signed by the Or Boonchuay camp.

Back then Petch was known as Rambo Or Boonchuay and would compete at around 100lbs. During his Muay Thai days he fought several big names such as Petchmorrakot Wor Sangprapai, whom he got a draw and a loss against, plus Yodwicha Por Boonsit, whom he beat, and Kwankhao Mor Rattanabandit. 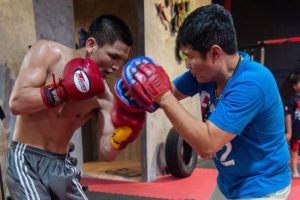 After switching to the Petchyindee camp he was offered the opportunity to compete inside the squared circle on very short notice. Petch won his first seven fights inside the distance but says he struggled to adjust to a different sport and set of rules,

“At first it was difficult as I was never really known for using my hands when I fought, I was always more of a technical, femur (technical) style fighter. It took me about seven fights to really get used to it.”

At first he combined his Muay Thai and boxing careers but after competing successfully in the sweet science for the third time he decided to make a permanent switch. Petch didn’t go the distance until his eighth fight, but believes this was a watershed moment.

“It was my fight with Jessie Tuyor of the Philippines, not long after I won my first belt, the WBC Youth Flyweight title, that made me realize I was getting good at the sport and could make something of my career. I started to really feel confident in my boxing.” 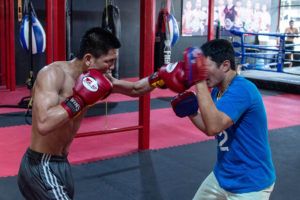 Fighting in cold climates can sometimes present a challenge for fighters from Thailand, who are used to cutting weight in tropical conditions. But Petch is confident he will have no issue making the 118lbs limit.

“No this weight shouldn’t be a problem for me, we go over about six days before and I will probably be 1 or 2kgs above the limit when I arrive, so should be easy to get to the weight limit.”

According to Petch there is no specific gameplan for this contest, which will clearly be the biggest challenge of his boxing career. In his corner will be a man who knows what it takes to win a WBC world title fight in Japan.

Chatchai Sasakul claimed the WBC 112lbs title with a decision win over the undefeated Yuri Arbachakov in 1997. There are clear parallels with the challenge awaiting his young protoge and Petch plans to follow his trainer’s instructions to the letter.

“I will follow whatever my trainer Chatchai Sasakul says during the fight. I want to become a world champion.”