The Road to ONE Thailand tournament reached the semi final stages on Saturday. Fairtex promoted the event at Lumpinee Stadium which saw fighters in three division take the penultimate step on their route to winning a $100,000 contract with ONE Championship.

In the women’s atomweight division. Lomanee Thelegendarena put in a solid performance to outpoint Gamlaipetch Petchyindeeacademy. The latter showed some strong punches, but was unable to hurt her experienced opponent who landed sharp kicks and knees to advance to the final.

In the second semi final Celeste Hansen ground down Duangdaonoi Luksaikongdin to move on to face Lomanee in the final. The Thai looked slick early on, using good footwork to move off of her opponent’s attacks, but the Australian fighter pushed forward relentlessly.

Hansed dragged the fight into the clinch and slowly got on top. Duangdaonoi complained that her opponent was pulling her hair but the referee didn’t spot anything amiss and the Australian took the decision win:

The semi finals of the men’s featherweight tournament finished much faster. Avatar Tor Morsri, who beat Wanchalerm in the last round, stopping Kaennorasing DNA-Thailand in the second round with a devastating barrage of punches and elbows to book his spot in the final.

Meanwhile Yodphupaa Tor Yotha finished his semi final in just over a minute of the opening round, crushing Kwantung Realfighter with some heavy punches to set up a mouth watering clash of heavy hitters with Avatar in the final.

Kwantung was reinstated in the tournament after Yod-IQ PkSaenchaimuaythai had to withdraw due to illness and he made the most of the unexpected opportunity:

In the first of the flyweight semi finals Starboy Petchkiatpetch faced Sornrak Sitporjorwor. The latter is from Myanmar and came out attacking with vicious elbows from the start which soon had his opponent in trouble, wobbled badly by an elbow.

Sornrak cut him on the bridge of the nose and more hard elbows opened up a nasty cut over Starboy’s right eye. The referee stopped the action to consult the ringside doctor, who instructed him to call off the contest.

On the other side of the bracket Detduanglek Sor Sommai faced off against Thai Sorjorpiakuthai to decide who will face Sornrak in the finals. The former is the younger brother of ONE Championship star Kulabdam Sor. Jor. Piek Uthai and he attacked mercilessly with heavy punches and elbows.

Detduanglek weathered the storm well though and controlled the ring, picking off Thai with sharp knees and push kicks. By the end of the fight he looked in complete control and won by decision.

The finals will take place at Lumpinee stadium on the 29th of October. 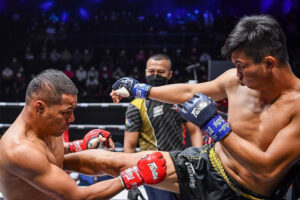 Avatar beats Wanchalerm at Road to ONE Thailand