There is only one title fight to make in ONE Championship’s atomweight division and it appears to already be in the works. Seo Hee Ham is next in line to face Angela Lee and it it a matter of when, not if, their paths cross.

There appears to be a healthy respect between these two ladies. In an interview with MMA Mania the champion had the following to say about the #3 ranked Korean,

“I was impressed (by Ham’s win over Denice Zamboanga) she’s a tough girl. I think a lot of people don’t realize or forgot she’s been competing for a while. She’s a veteran in the sport and one of the pioneers for women’s MMA in Korea. So I think there’s a lot of hype going into this fight. I look forward to competing against her and seeing how things go inside the cage.”

While Jihin Radzuan is also on a three fight winning streak it seems Ham is next in line. The Korean has won her last eight fights and has some of the biggest names in the division on a very impressive recent resume. Since parting ways with the UFC she has beaten Mina Kurobe, Jinh Yu Frey, Miyuu Yamamoto and Ayaka Hamasaki as well as Zamboanga. While the first decision win over the Filipina was highly debatable there can be no doubt about the most recent.

Ham controlled the fight at ONE: ‘X’ from start to finish, recovering from an early clash of heads to impose her wrestling on Zamboanga. In the main event Lee mounted a successful comeback of her own, returning from a two year absence to submit Stamp Fairtex in the second round.

Stamp did hurt the champion with a left hand to the body in the opening round. While Ham doesn’t have anything like the same level of Muay Thai experience as the atomweight Grand Prix winner she is known for her punching power. 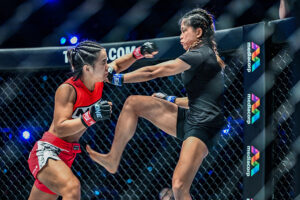 Xiong Jing nan also targeted Lee’s midsection during her win at ONE: ‘A New Era’. But the champion has never lost a fight at atomweight even if opponents like Stamp and Mei Yamaguchi have had their moments.

Lee is the undisputed atomweight queen, the first and only fighter to ever hold the belt. But Ham could well be her greatest challenge yet and this could well turn out to be the biggest ONE Championship bout of the year.