Sittichai Sitsongpeenong’s long awaited ONE Championship debut did not go according to plan. He dropped a razor thin decision to fellow Thai Superbon Banchamek.

The long time Glory lightweight champion will be looking to rebound with a win at ONE: ‘Battleground’ next week. He has been matched with promotional newcomer Tayfun Ozcan and knows exactly what is at stake at the Singapore Indoor Stadium next Friday,

He believes he is the best but Sittichai admits that Superbon was better than him in certain areas,

“When I lost to Superbon in my debut last year, I think it was probably because I was slower and Superbon was bigger but I’m sure that in this return, I’m well-prepared, so I should be able to perform better than last time.” 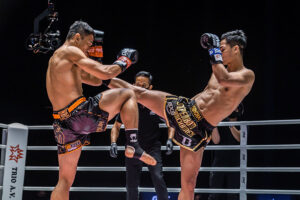 Both men have spent time competing on the kickboxing scene in Europe and Sittichai has seen several of his opponent’s fights,

“Tayfun and I have never met before, but if you let me analyze him from watching his fight videos, I see him as a strong, hard hitter who can sting you all the time. And his roundhouse kick is quite dangerous,” Sitthichai says.

However he does see some weaknesses in the Dutch / Turkish fighter’s game,

“I can see his weaknesses. His attacks may be quick, but not powerful, and he has a glass chin, too.

He also thinks there is something important missing from Ozcan’s resume,

“I am a southpaw. This can be my advantage over him because he has never fought with a southpaw fighter before. He probably wouldn’t be able to handle a southpaw. He is also happy to give the fans some insight into the tactics he intends to employ,

“As for my game plan to handle Tayfun’s boxing, I wouldn’t have to fight him straight, but I’d wait for him to follow up and seize the opportunity to attack faster than him.”

The Covid-19 regulations in Thailand have been changing regularly in recent months but it sounds like Sittichai has had no issue putting together a training camp,

“My current physical condition is 100% good. In training, I’ve been focusing on rehabilitating my agility level and developing my punches to hit harder and faster than before.” It will be an unfamiliar setting for Sittichai but he says he has made special preparations to be ready for the circular carve that will be employed at ONE: ‘Battleground’,

Having lost on his debut Sittichai isn’t talking up his title dreams. Instead the Thai veteran is focused on performing to his fill potential in every fight,

“As for the next goal in ONE Championship, I will continue to maintain my performance and give it my best in every fight whether I win or lose.”