Stamp Fairtex submitted Ritu Phogat in the second round at ONE: ‘Winter Warriors’. The Thai fighter finished the fight with an armbar to win the promotion’s atomweight Grand Prix and earn a title shot.

Both came into the final of the tournament with identical records. Phogat shot for a takedown as soon as the fight started but Stamp shrugged her off and seized the centre of the cage.

A second takedown attempt was also stuffed but eventually Phogat succeeded in trapping Stamp against the cage as she worked for a single leg. They remained in that position for several minutes with the Thai landing the occasional knee to the midsection as the Indian worked to get the fight down. Eventually Phogat sank in a double leg takedown and lifted Stamp clean off her feet. Everyone was expecting a slam but the Indian thought better of it and put her back on her feet, probably because she didn’t want to get trapped in a guillotine.

It felt like Phogat had turned down an opportunity to make a big statement with the slam but it turned out she was right to be worried about her opponent’s submission skills. She completed a single leg takedown right at the start of the second round and had over four minutes to work.

But it was Stamp who made the position count. She established guard and then locked in a triangle choke. Phogat thought she had moved away from the danger only to find herself trapped in an armbar.

The tap came at the 2:14 mark and Stamp celebrated with one of her trademark dances. She improves to 8-1 and earns a shot at Angela Lee while Phogat drops to 7-2. Earlier in the night Saygid Arslanaliev (9-2) stopped Timofey Nastyukhin (14-6) in the second round after an absolute war. Both men were bleeding profusely from facial wounds but it was the Turkish based fighter who did the most damage. 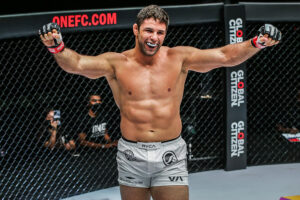