Suakim comes from behind to beat Rungkit at Rajadamnern birthday show

The 73rd Rajadamnern stadium birthday show saw a huge crowd pack into the iconic stadium. Attracted by some quality match ups and also the opportunity to win prized which included gold chains, motorcycles and a brand new Toyota Camry.

The show was a co-promotion with Nuttadej Vahirarattanawong, a regular Rajadamnern promoter Petchyindee,  joined by ONE Championship for what is traditionally one of the biggest cards of the Muay Thai year. 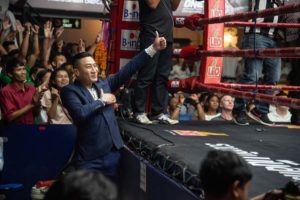 The opening fight of the night saw Boonlong Klongsuanpluuresort face Samingdet Nor Anuwat gym. The action was close up until round three, when a vicious elbow from Samingdet sent Boonlong down for an 8 count. Boonlong rallied back, but couldn’t make up the points deficit and Samingdet took the decision.

Next saw undefeated boxing prospect Satanmuanglek Petchyindeeacademy make a one off return to the Muay Thai arena, especially for the show. He faced former Rajadamnern mini-flyweight champion Anuwat Natkinplaa and in the first three rounds of the fight it looked like Satanmuanglek was struggling to transition back, his opponent using a fast low kick to take out his leg as he tried to punch.

Satanmuanglek took the pace up a notch in the fourth though and relentlessly chased Anuwat around the ring, scoring with hard body shots and solid knees and kicks. The boxer dominated the most important round to take a big lead into the fifth and took a clear win at the end. Somraknoi Muaydet789 looked to be heading for the win in his fight with Kompatak SinbiMuaythai, but the Phuket based super bantamweight managed to turn the fight around in the fourth and took a clear win at the end.

Diesellek Wor Wanchai vs Wanchalong PKSaenchaimuaythai gym was a classic match that pitched the former’s youth and form against he latter’s vast experience. The fight was a mirror image with both having the same style, but the teenager orthodox and the veteran a southpaw.

In the third the fight swung drastically in Diesellek’s favour after a perfectly timed elbow sent Wanchalong down for the count. The former Lumpinee champion showed his usual heart and determination in the later rounds, desperate to get back, but it wasn’t to be and the younger man took the win. 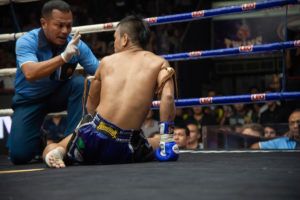 Before the match up between Praewprao Muaydet789 and Sayanlek Sayan gym, the former’s manager threw down the gauntlet to every fighter in Thailand between 106-108 lbs, stating that his charge was ready to take on anyone.

It looked like the statement was about to backfire badly in round three, when Praewprao took an eight count after a heavy elbow shot. Praewprao wasn’t about to give up easily though and he managed to turn the fight around in the fourth and fifth with relentless pressure and strong punches and knees.

The atmosphere was electric as the crowd roared on every shot Praewprao threw and he took a very close decision at the end of a remarkable comeback. ONE Championship star Petchdam Gaiyanghadao had a tough night at the office against the tough veteran Detsakda Phukongyatsurpudomsuk. Petchdam tried to get his trademark left kicks working, but was put under non stop pressure in the clinch from Detsakda, who went on to take the decision and got a nice gold chain bonus at the end of the fight.

The pre main event saw two technical stylists in action with Superlek More Ratonabandit taking on Gaonar PKSaenchaimuaythai gym. The match was, as expected, more of a chess match than an out and out brawl and it was Gaonar that came out on top after out catching Superlek with explosive counter shots throughout the fight. The main event was a clash between current Rajadamnern 130lbs champion Rungkit Mornbeskamala and current Lumpini 130lbs champion Suakim Sitsortortaew. This was fight of the night with both fighters opening up throughout with heavy shots. It was very close in the final round and Rungkit looked to be heading for the win after dumping Suakim spectacularly to the canvas.

But Rungkit elected to sit back which allowed Suakim to edge ahead with some determined knee attacks, eventually taking the honours at the end of five hard fought rounds. All three judges scored the fight 49-48 in his favour. 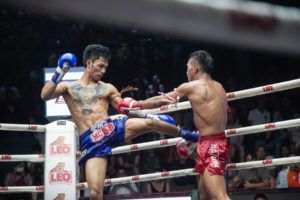 The show took an impressive 4.5 million Baht at the Rajadamnern Stadium turnstiles in what was a successful night for Petchyindee and ONE Championship’s first ever co-promotion. We will no doubt see more collaborations in the future.