Suakim Sitsortortaew is another of the current crop of main stadium fighters starting to show his talents overseas. He has held the Lumpinee title at 118 and 122lbs along with the Channel 7 122lbs title and is the current 130lbs champion at the former stadium.

Suakim has fought twice in Japan now and is taking part in the first round of the Rise World Series <58kgs tournament on March 10th. He faces Thalisson Gomes Ferriera in the first round but admitted to not knowing anything about his opponent,

“I haven’t watched him fight yet. I have been preparing well for the fight though and will study some of his fights soon,” he said.

Also in the tournament are Suakim’s compatriot Rungkit Morbeskamala, Shiro, Frederico Roma, Fred Corderio, Vladyslav Mykytas and Tenshin Nasukawa. The latter made headlines all over the world when he faced Floyd Mayweather in an exhibition boxing match at Rizin 12. 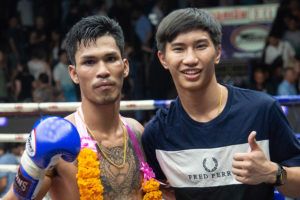 Suakim faced Tenshin at the start of 2018 in a five round fight with Japanese promotion Knockout. It was his first fight outside of Thailand and he dropped a decision to the Japanese fan favourite,

“Tenshin was my first opponent abroad and he was very difficult to fight. I had to drop down to 122lbs for the fight, when I was fighting at 126lbs in the stadiums. He was very fast and I struggled with having little energy in the fight. I took the fight at the weight though as I wanted to try fighting overseas. I am confident I will be able to able to beat him at 58kgs (128lbs).”

Suakim and Tenshin are scheduled to meet in the semi finals, assuming they progress through the tournament’s opening stage. It would be a major upset in Japan if the local favourite didn’t win but the Thai fighter says he has been in with better opponents,

“My hardest opponent so far has been Panpayak Jitmuangnon, he was too fast and too technical, I struggled to do anything against him. My most painful fight so far was when I was still young and not fighting in Bangkok yet. I fought Chockpreecha Sor Sakulsua, who went on to become a Lumpinee champion, he punched very hard and hurt my legs with hard low kicks.” 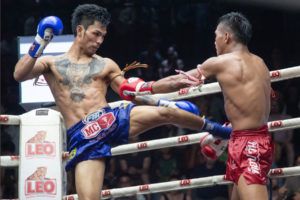 Suakim started his career like most Thai fighters at a young age, back in his home province Chantaburi,

Suakim spent a long time fighting out of his original gym in Chantaburi, but it was when he got the chance to move to Bangkok that his career really took off,

“I came to Bangkok to train and fight out of PKSaenchaimuaythai Gym not long after it opened four years ago, it helped me get more of an advantage over my opponents as there are so many good fighters here to clinch with and learn from. The owner really looks after us in terms of food and supplements and we get big tips of gold and money when we win. There is also a lot of pressure to do well though and we all want to win for the owner.” 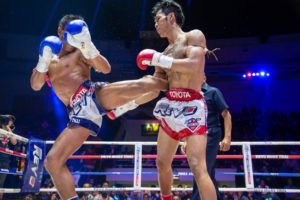 Eyes on the prize

Suakim is looking forward to fighting overseas more regularly as well as continuing to compete in Thailand. However he has had to make a few adjustments,

“For me it is a little more difficult to adapt to fighting overseas, my style sees me use a lot of elbows and clinching which isn’t always allowed outside of Thailand. I have had to adapt my training to working my boxing more and doing less clinch work before overseas fights. I don’t have any set goals to fight overseas, but I want to fight abroad more and see more countries.”

Domestically he has his eyes on the biggest prize of all but Suakim is concerned he doesn’t compete regularly enough to be in with a chance of winning the country’s Sports Writers’ ‘Fighter of the Year’ award,

“In Thailand I just want to keep defending my Lumpinee title, I would like to maybe get the ‘Fighter of the Year’ award, but it is difficult for me know to get enough fights in a year to have a strong chance of winning. I am 23 now and haven’t really thought much yet about what I want to do after I finish fighting. I still feel I have a lot more years left in me as a fighter.”

While the Rise World Series tournaments won’t make any headlines in Thailand a win over Tenshin would do wonders for Suakim’s international reputation. If he gets past Ferriera next weekend the 23 year old can probably start preparing for a high profile rematch.