The records of Sunisa Srisen and Stamp Fairtex are very similar but their reputations are worlds apart. The former has emerged as a bonafide star on the ONE Super Series while the latter hasn’t fought in nearly three years.

Srisen holds a record of 3-0 with all three wins coming at Full Metal Dojo events. One of her opponents would go on to sign with ONE Championship but the 19 year old is well aware that Stamp will be a strong favourite,

“Stamp is very good all round, especially in the standup department but I am not scared to face anyone,” she said.

Srisen has been preparing specifically for Stamp who she faces at ONE: ‘No Surrender’ on Friday. She says her trainer has come up with the perfect gameplan,

“Master Kok has studied her previous fights and worked out a game plan to beat her already. We will not fight her in her game where she is the strongest but work on using my strong points and focusing on my wrestling.” 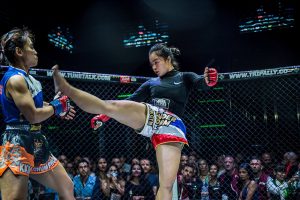 Wrestling is clearly not Stamp’s strong point. Srisen seems confident that if she can get this fight to the ground the odds will swing in her favour.

The teenager is not short of ambition and believes beating Stamp could be the first step on her journey towards becoming a title holder with ONE Championship,

“Anything can happen in the fight and if I manage to beat Stamp I am ready to follow my dream to become a champion.”

It will be ONE Championship’s first major event since lockdown began. While there will not be a live audience present in Bangkok there should be plenty of people watching the action online and on Thai Rath TV in Thailand. For Srisen it will be a special moment. She thinks fighting on such a big stage is the perfect way to prove to her family that her choice of career was the right one,

“Originally my mother was really against me fighting as she worries I will get hurt. I am determined to succeed though and show my family I have what it takes to be the best,” she said.

However the teenager knows that victory is far from guaranteed. With such an impressive record a setback would not necessarily be fatal for her prospects as a future champion.

She sees Friday’s fight as a valuable experience and one that will bring her closer to her dreams regardless of the outcome,

“Win or lose is not the most important thing though. As long as I learn and get experience to work towards my ultimate goal of being world champion.”