It was a night to remember for Thai starlet Sunisa Srisen as she secured a unanimous decision victory against Rika Ishige at ONE: ‘A New Breed’ Part III in Bangkok.

The last couple of months have been a rollercoaster of emotions for the 19 year old who was drafted in to face Stamp Fairtex at ONE: ‘No Surrender’ in July. In what was her promotional debut, she found herself totally outclassed as she lost inside a round.

Making a quick return to the Impact Area the teenager bounced back with a landmark win over a ONE Championship veteran. Ishige came into the contest with a 4-4 record and appeared tentative from the outset. The popular Japanese/Thai atomweight was looking to snap a two fight losing streak but Srisen had some success early on with her low kicks. The teenager landed with a big, counter right hand at the end of the first round.

Ishige had some more positive moments in the second and had an opportunity to sink in a rear-naked choke late on, but the bell rang before she could cause any danger. Srisen, who came into the bout with a 3-1 record, had never been as far as the third round in her professional career.

With both women showing a lack of urgency in the third yellow cards were issued. Despite the absence of fireworks, it was an important milestone for Srisen as she did enough to get the win and take her record to 4-1 while Ishige slips to 4-5. 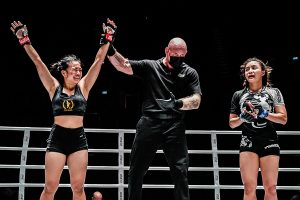 The main event was a far more explosive affair as Petchmorakot retained his ONE featherweight Muay Thai belt with a third-round finish of Magnus Andersson.

The Thai continues to enhance his reputation as one of the best strikers on the planet and picked the Swede apart with some heavy pressure and deadly combinations.

The third-round finish came by virtue of some strong elbows in close quarters followed by monster left hands from the outside which left the challenger wobbling. The Thai then punctuated a dominant display with one, final, surgical straight left which prompted the referee to stop the fight. Elsewhere, the biggest shock of the night came in the penultimate bout as Captain PetchyindeeAcademy took just six seconds to knock out Petchtanong Petchfergus.

Petchtanong is a multiple-time world champion and came into the fight with several kickboxing titles to his name. But no sooner had the bell rang than he found himself lying flat on the canvas having been on the receiving of clinical right hand.