K’Festa 3 went ahead today despite concerns about the worldwide spread of Covid-19 and attracted a large crowd to the Saitama Super Arena. The show was headlined by Takeru who faced Petchdam Petchkiatpetch, a late replacement for Adam Bouarourou, who was unable to fight due to travel restrictions.

The opening round saw both just testing each other out with fast low kicks. Takeru opened up with a solid combination of punches to the head and body midway through the round.

Petchdam’s best shot of the round came as he landed a hard body kick with 30 seconds to go, but he was caught by a heavy overhand right just before the bell that dropped him for an eight count.

Petchdam came out strongly in the second round and opened up with some hard punches, kicks and knees and looked determined to stand his ground. Takeru looked to trade back, and just 30 seconds into the round rocked Petchdam with a hard overhand right. 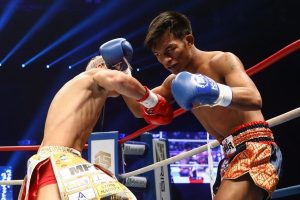 Takeru unleashed a huge barrage of punches, catching and rocking Petchdam repeatedly, before the Thai crashed down to the canvas, unable to beat the count.

After the fight Takeru took to the mic to give an emotional speech, appearing to break down in tears at times.

“Thank you for all the support. I want to apologize to everyone who was looking forward to the double title match. But no matter whether it’s a super fight or a title fight, I want to give people energy through my fights. It’s thanks to you I can perform like this.”

Wajima’s route to the final saw him stop Thai fighter Avatarn Tor Mohsri in the third round, with a vicious low kick after dropping him in round two with a hard, straight left. In the semi-final he beat his compatriot Yasuhiro Kido on points.

Minuro had a quicker route to the final, winning both his matches in the first round. He beat Japanese fighter Kaito in the quarter-final and Portuguese fighter Eder Lopes in the semi-final.

The final would be the second time Wajima and Minuro had met, with the Brazilian winning by first round knockout on K’Festa 2 back in March 2019.

This fight was also short lived though and had barely got going, before Minuro landed with a heavy overhand right, a minute into the opening round, that sent Wajima down for the count. Minuro needed just 3 rounds in total to win the whole tournament. Iran’s Sina Karamian successfully defended his K-1 cruiserweight title in a wild back and forth brawl with Ryo Aitaka. Karamian started well, landing with strong kicks and knees, before getting dropped heavily near the end of the opening round by a hard overhand right.

Aitaka came out strongly again in the second, but got caught and dropped himself by a fast spinning back kick and had to dig deep to survive the following onslaught from Karamian. Both fighters looked tired in the final round, but it was Karmanian that landed the more effective shots and he retained his title with a points win.

Rukiya Anpo made the second defence of the K-1 super-lightweight title, that he won from Kaew Fairtex, taking on fellow Japanese fighter Fukashi. Both started slowly at first in the opening round before Fukashi started to attack the head and body of Anpo with some heavy punches.

Just before the end of the round Anpo landed with two precise right hands that sent Fukashi headfirst through the ropes and almost out of the ring. Fukashi came back hard for the rest of the fight, but the knockdown from round one proved to be too much to overcome and Anpo retained his title with a points win.

In the other title fight of the night Yuta Kubo successfully defended his K-1 welterweight title after a slick performance, outpointing Jordan Pikeur of the Netherlands.