Tawanchai PKSaenchaigym‘s second ONE Championship fight will be broadcast this week. The 22 year old had expected to be fighting Saemapetch Fairtex at the Singapore Indoor Stadium but that plan was nixed at the last minute.

Instead he faces Sittichai Sitsongpeenong at ONE: ‘Battleground’ Part III which is being broadcast for the first time on Friday. Tawanchai’s opponent has already established himself as one of the best kickboxers in his division and he sees it as an opportunity to really make a name for himself outside of Thailand,

“If I could win, people all over the world would accept me and see I could fight with a world-class fighter. So, I need to (beat) him to gain my fame,” he said. 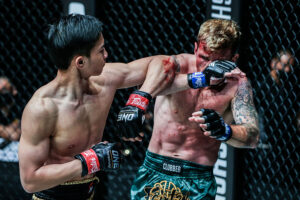 Tawanchai had originally been set to compete at bantamweight but will be moving up 10lbs to fight Sittichai at featherweight. However, unlike his opponent, he has been competing regularly in Muay Thai and prepared for a Muay Thai fight.

Tawanchai sees this as an advantage and believes Sittichai will be rusty after such a long absence from the sport,

“I think I have an advantage in terms of Muay Thai rules. (He) hasn’t done Muay Thai for a long time. Muay Thai is my way.”

Tawanchai needed less than three rounds to finish Sean Clancy at ONE: ‘Dangal’, taking the Irishman out with a head kick. Given the size difference he knows he might struggle to finish Sittichai inside the distance. 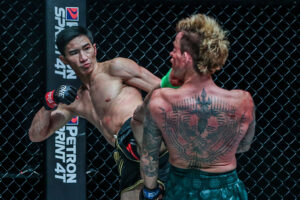 But Tawanchai believes his strategy and speed will make the difference in this contest,

“I’ll use my Muay Thai tactics to win. I’m swifter and faster. It would be great to knock him out but it will be hard. I just want to win, whether by a KO or not.”

While Sittichai hasn’t competed in Muay Thai since 2014 he has had an extremely successful kickboxing career. Tawanchai has watched his fights with Glory as well as his ONE Championship debut and knows exactly what type of threat the 29 year old poses,

“I think the most dangerous weapons are his punch and left kick,” he said. 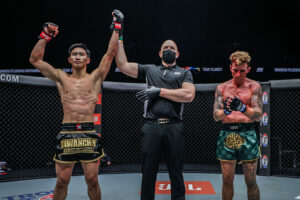 The featherweight Muay Thai title is currently the property of Petchmorrakot Wor Sangprapai. Tawanchai signed for ONE Championship as a bantamweight but it sounds like he is in no hurry to drop back down.

If he beats Sittichai then Tawanchai will look to challenge for the featherweight Muay Thai title next. He is a man on a mission and wants to get his international career off to the perfect start,

“My dream is to be the ONE Championship champion. I need to get it. That’s my new goal. I’ll win the belt from Petchmorakot.”

If Tawanchai beats Sittichai then he will be instantly established as a top contender in the featherweight division. He is also ranked #4 at bantamweight and a second ONE Championship win could earn him an immediate title shot in either division.