Sittichai Sitsongpeenong excited to be competing in Muay Thai again

Sittichai Sitsongpeenong was not expecting to return to Muay Thai. Having reached the very top in the more lucrative world of kickboxing the former Glory lightweight champion has no need to switch codes.

But if there is one thing that Covid-19 has taught us it is to expect the unexpected. When Tayfun Özcan withdrew from their kickboxing contest with an injury Sittichai was offered a Muay Thai fight and he didn’t hesitate to accept.

Sittichai’s last Muay Thai fight was in 2015 but the former Lumpinee welterweight champion had no hesitation in accepting the unexpected offer, 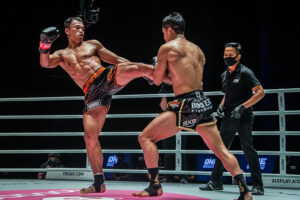 Although it is a long time since Sittichai last used his elbows the 29 year old is confident he has the skills required to beat Tawanchai PKSaenchaigym who is a top fighter on the current stadium scene,

One factor in Sittichai’s favour will be the weight with Tawanchai originally booked to compete at bantamweight,

“I’ve been in this weight range, and I’m sure I have more forceful weapons. He might not be able to stand my strikes, while I could stand his strikes. I’m heavier with heavier weapons.” 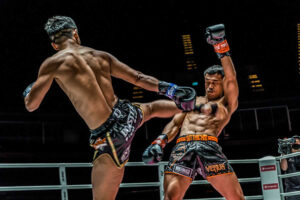 With Tawanchai agreeing to the featherweight fight at relatively late notice Sittichai is understandably confident that size will be on his side. But Tawanchai is seven years his junior and he will be wary of his opponent’s speed,

“Tawanchai is a smart boxer with beautiful and fast strikes. He is a young, healthy rising star. The most dangerous weapon from Tawanchai would be his neck kick and his left kick, and also his elbow strikes. His elbows are deadly.”

Sittichai might be making an unscheduled foray back into the world of Muay Thai. But if he beats Tawanchai the 29 year old won’t be in a hurry to return to kickboxing. 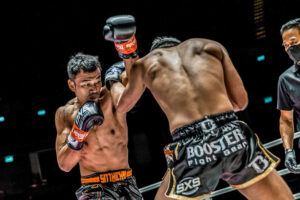 The smaller gloves should favour the bigger man and Sittichai says he was already expecting to fight Ozcan in MMA gloves so there are no surprises there,

“I have expected already that I would get to fight in small gloves so I’m very happy.”

“I’m glad. I wanted to be a part of it because ONE Championship has many types of boxing, such as Muay Thai and kickboxing.”

Having lost to Superbon Banchamek any ambitions Sittichai harboured of challenging for the featherweight kickboxing title are surely on the backburner. Muay Thai might provide a more direct route to a ONE Championship belt and he knows a win over Tawanchai would potentially put him in pole position for a shot at Petchmorakot.