It is instinctive for people to look for someone to idolize, look up to and imitate. Someone from whom they draw strength and inspiration from, to go on with their lives towards, to mold where they want to go and what they want to be.

This is the reason why people look up to the rich and famous, celebrities who grace the celluloid movie screens, athletes who have made names and millions, wealthy business tycoons, and the list goes on and on.

For an aspiring combat sports athlete like Jhanlo Sangiao, he never had to look far to find inspiration. All he had to do was come home from school and have a cup of brewed coffee with him in the comfort of their home.

Growing up in the municipal town of La Trinidad in the Philippine mountains of Benguet, Jhanlo is heavily influenced by his father, Mark Sangiao, who needs no introduction as the respected head coach of Team Lakay.

“He is my idol,” Jhanlo quickly responded when he was asked to describe his dad. 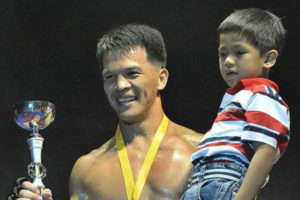 Before he became the headmaster of the famous all-Filipino MMA stable in 2003, the innovative trainer had to experience life as a fighter for himself.

Mark soldiered ahead in his martial arts run, beginning with kickboxing in 1995. He transitioned to taekwondo in 1998 and made the varsity wushu squad at the Baguio Colleges Foundation, which was later renamed as the University Of Cordilleras in 2003.

In the years to follow, he won a slew of national titles, joined the Philippine Wushu Team in 2001, and won a gold medal at the Southeast Asia Games that same year in Kuala Lumpur, Malaysia.

“Whenever I see his medals, trophies, or even his certificates on the walls of our home, it makes me feel so proud that he is my father and I am his son. As a teenager, it motivates me a lot. It motivated me to at least reach the level that he has achieved during his younger years,” Jhanlo said. It was only natural for Mark to shift his focus to MMA. Debuting in 2003, he became a mainstay in Alvin Aguilar’s URCC and fought on a few smaller shows as well.

Over the next six years ‘The Machine’, as he was called, amassed a respectable 7-2 record,

“My dad was an exciting fighter. Up to this day, he is still in good condition. I watched a couple of his old fights, and there are some things that I try to incorporate in my own fighting style. I enjoyed watching my dad back then,” Jhanlo, who was then four or five years old, recalled.

At the peak of his professional career in 2010, Mark opted to hang up his gloves for good to focus on coaching then-rising star Eduard Folayang and other members of Team Lakay.

“It’s such an unselfish act on his part. At that time, there were a lot of athletes who needed his help. He didn’t think twice to lend a helping hand,” Jhanlo said about his father’s retirement from the sport. Now that he embarks on a journey as a martial artist, Jhanlo is more than grateful to have his father in his corner and oversee what he does every step of the way.

“I am thankful that he supports my passion for combat sports. I respect him a lot. I always keep my ears open whenever he gives me pieces of advice,” he stated.

Mark confided that martial arts has been a big influence in raising Jhanlo, where discipline and character formation are foremost aspects of it.

“It’s the best way to develop a child’s character. It wasn’t required in our household, but I understand the benefits that martial arts offers to young ones and the confidence that they may have as they grow up,” the Sangiao family patriarch explained.

In boxing, many father-and-son tandems have emerged. Despite the lack of common genes between Floyd Patterson and his adopted son Tracy Harris Patterson, boxing fans watched with mouths agape over their championship conquest.

They also followed the Mayweathers’ often turbulent relationship beyond the ropes, as well as Julio Cesar Chavez’s bequeathal of his legacy to Julio Cesar Jr. and Omar.

There are fewer father-and-son duos in MMA. But Jhanlo, a 17-year-old senior high school student at the Benguet State University, has already shown signs of potential. In the amateur MMA ranks, Jhanlo is undefeated with two submission victories under his belt, earning the moniker ‘Little Machine’. He sets the same sort of relentless pace his father was once renowned for.

Aside from MMA, Jhanlo is also gaining an impressive reputation in the kickboxing ring, consistently getting podium finishes in the yearly Philippine National Muay Thai Open.

The younger Sangiao is now gearing up for IFMA World Youth Muay Thai Championship 2019 from September 28 to October 6 in Turkey.

Some successful fighters want their children to follow more mundane careers but Mark does not fall into this category,

“A few years back, I asked him what he’d like to pursue in life and he said he wants to be an MMA champion. So as his father, I give him my 100% support,” he said.

But Mark is well aware where his son’s interest in the sport began,

“He would watch my training and fights when he was a young kid, so that must be the reason why the sport also rubbed off on him,” Mark added. 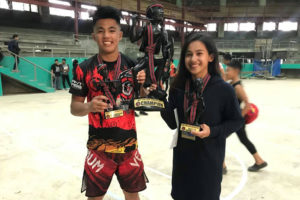 Mark, who steered the likes of Folayang, Honorio Banario, Joshua Pacio, Geje Eustaquio and Kevin Belingon into championship glory, stressed the importance of guidance in grooming world-class athletes, and that is what he strives to provide Jhanlo,

“I don’t subscribe to harsh discipline. I simply advise him to do what is right, to train hard but also study hard. I tell him, he should always come to a fight prepared not only physically, but also mentally and spiritually,” he said.

However he is adamant that his son does not get treated any differently to the other fighters in the Team Lakay stable,

“I treat him fairly like how I treat my other athletes at the gym. They all get the same share of fair treatment,” Mark continued. 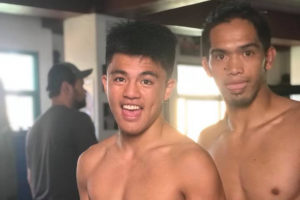 Although Mark is optimistic that it will be a matter of time before his son joins a major promotion,  his plan is to have Jhanlo dabble in different martial arts before transitioning into the multi-faceted world of MMA.

“I want to him to learn and master different martial arts before he jumps into MMA. We all know that MMA consists of many styles and he has to be comfortable in those styles. So far, he is doing a great job. I am impressed,” Mark said.

Mark is fully aware of the fact that the sporting world is littered with sons who tried and failed to follow in their father’s footsteps. But whatever the odds he believes his son will have a successful career,

“Time and time again, Team Lakay proved that impossible is just a word. I believe that if we will work together, it is possible. It’s going to be difficult, but I will be there for Jhanlo through highs and lows,” he assured.