For Akihiro Fujisawa 2019 was a frustrating year. The Bangkok based fighter lost three fights out of three without ever making it out of the opening round.

It was a chastening experience for the previously undefeated 40 year old. But despite his advancing years and declining form Fujisawa never thought about quitting.

“I was testing new things so I was not able to perform as I wanted. It was a frustrating experience (but) it’s no use crying over what has happened already and I learned a lot from it.” Fujisawa doesn’t put the defeats down to a decline. He just thinks losing is part and parcel of life as a professional fighter,

Things won’t be getting any easier for Fujisawa on Friday. He faces Pongsiri Mitsatit at ONE: ‘No Surrender’ part II in Bangkok and is well aware of where his opponent’s strengths lie,

“His background is Muay Thai, so I think he is good at striking,” he said. Fujisawa knows he will need to take Mitsatit out of his comfort zone if he wants to snap that three fight losing skid,

“I think it is best to take him down, control the ground game, and submit him. If I cannot do that, I have various options. When it comes to mixed martial arts, I think I have more skills in my toolbox than him.”

Fujisawa is 16 years the senior of Mitsatit and sees this as an advantage, Fujisawa feels that he benefitted from the lockdown. The veteran thinks his diet and lifestyle improved,

“I cooked my meals, and as a result, I didn’t eat anything extra and lost weight. It was ideal for conditioning my body,” he said.

Fujisawa also remained active and says this allows him to transition seamlessly into a full fight camp,

“Although the gym was closed I was running, and I also did body weight training and shadow boxing.”

Fujisawa also feels it was a valuable experience because he had the time to assess his previous performances and focus on areas of potential improvement,

“It was good to take the time to review my strengths and weaknesses. I re-examined what I was not able to notice in my daily routine at the gym. I focused on moving as I imagined. I tried to build up physical strength.” Fujisawa is a long term Bangkok resident. It means he is in the right place at the right time with ONE Championship holding a series of fight cards in his adopted hometown.

There will be no audience at the Impact Arena on Friday. The tourism industry in Thailand has been decimated and it might take the economy decades to recover.

It is a tough time for many people in Thailand including the big Japanese community in Bangkok. These are the people that Fujisawa says he will be fighting for on Friday,

“In Thailand, many people are stressed out due to the pandemic including Japanese residents. I want to win in an impressive way so I cheer those people up.” Shoko Sato says he is becoming more of a grappler ahead of ONE: ‘Unbreakable’ Part III 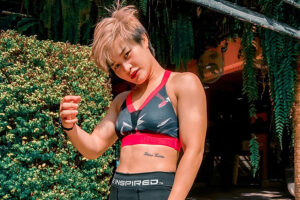 Captain Petchyindee sees some big matchups in the lighter divisions