Yodsanklai Fairtex has retired, again. Having lost his last three fights the 35 year old took to Instagram to make the announcement earlier today:

Yodsanklai won the Contender Asia tournament in 2008, for many in the mainstream audience this was a first taste of Muay Thai and it established him as an immediate star. He had previously held the Lumpinee flyweight and welterweight titles as well as the WBC super welterweight title.

After finding fame on Contender Asia he was invited to compete on some of the most prominent kickboxing and Muay Thai promotions in the world. Yodsanklai won the Thai Fight 154lbs tournament in 2013 and 2014 and was Lion Fight champion in the same division.

However his winning streak came to an abrupt halt in 2019 when he was beaten by Samy Sana in the quarter final of the ONE Kickboxing Grand Prix, getting dropped in the opening round and slipping to a decision defeat at ONE: ‘Enter the Dragon’.

At ONE: ‘Age of Dragons’ later that year he suffered the most surprising defeat of his entire career. Yodsanklai was stopped in the second round by Jamal Yusupov, a mixed martial artist who had accepted this kickboxing bout at the last minute.

Despite the defeat he was handed a title shot at ONE: ‘No Surrender’. Yodsanklai put up a good fight but was ultimately beaten by Petchmorrakot Petchyindee who prevailed by way of majority decision.

Yodsanklai also announced his retirement in 2017, only to return a few months later. But judging from the photo he posted in his retirement message the Thai veteran is nowhere near being in shape to take another fight.

Yodsanklai will go down as one of the all time greats. He established himself as one of the best in his division in Thailand and was in the right place at the right time to take advantage of Muay Thai’s growing global popularity with appearances on reality TV shows and numerous international fights. 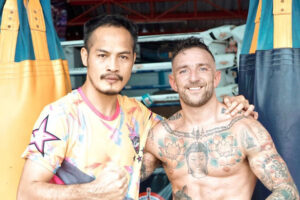