There was a time when Buakaw was the best 154lbs kickboxer on the planet. That mantle has now been passed to Superbon but while eight years separates the men they are still happy to share a ring for a sparring session.

Superbon shared some footage on Instagram of the two men going toe to toe at the Banchamek Gym in Chiang Mai:

Buakaw won the K-1 Max tournament in 2004 and 2006. He made the transition from Muay That to kickboxing look seamless, beating the likes of Nieky Holzken, Albert Kraus, Masato and Andy Souwer during a glittering career that appears to be coming towards an end.

Sueprbon is at the pinnacle of the sport in 2021. He is currently riding a 12 fight winning streak that includes victories over Sittichai Sitsongpeenong, Giorgio Petrosyan and Marat Grigorian.

That run has established him as the top pound for pound kickboxer on the planet in the eyes of most. Of course Buakaw was competing during a different era in the K-1 heyday. Buakaw made his name fighting at the K-1 Max tournaments in Japan. Superbon has become a star competing with ONE Championship in Singapore which reflects a general shift that has taken place in the kickboxing world.

But both men started out in Muay Thai and enjoyed success in the stadiums of Bangkok before switching codes to become major global stars.

Buakaw would later return to his Muay Thai roots becoming arguably the face of the sport during a very successful stint with Thai Fight. But towards the end of his career he has seldom been matched with the biggest names in the sport.

By contrast Superbon’s recent resume reads like a list of the top kickboxers in the world at his weight. Next up for the Thai is newly crowned featherweight Grand Prix winner Chingiz Allazov.

We are not sure whet is next for Buakaw. But after a very public and very acrimonious split with the Por Pramuk camp he seems to be enjoying his independence and must have earned more than enough money to retire comfortably. 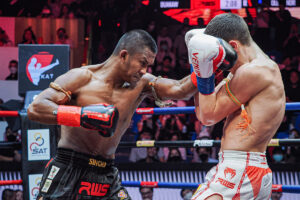