The Iranian Hulk went head to head with an opponent for the second time in Dubai yesterday and once again he was unable to keep his composure. Sajad Gharibi attacked The Kazakh Titan at the face off and the two men had to be pulled apart.

The Iranian Hulk did exactly the same thing ahead of the fight with Martyn Ford which he would eventually pull out of after appearing to have some sort of breakdown. The promoters for this bout, which is set for Dubai on Sunday, will be hoping history doesn’t repeat itself:

Despite the curious lack of photos from the face off fans were left wondering what had happened to The Iranian Hulk’s legendary muscles? His arms appeared a little flabby at the face off and his physique was nowhere near as impressive as it looks on Instagram.

He is also significantly shorter than you might expect given that The Iranian Hulk looks like an imposing giant on Instagram. But it’s all about context and without anyone else in the photo there is no way of judging how big he is.

But the lack of muscle on The Iranian Hulk’s slightly flabby looking arms was surprising: 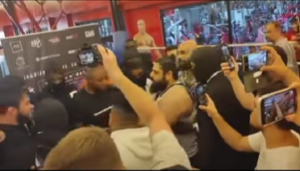 A video posted on The Iranian Hulk’s YouTube channel gives more insight into his trip. He can be seen arriving at the airport un Dubai, posing in the hotel room and going face to face with his upcoming opponent.

With the boxing match booked for Sunday and The Iranian Hulk already in Dubai it seems highly unlikely that he will pull out for a second time. But his inability to control himself when face to face with an opponent he has never even met before does not bode well:

The event will take place at the P7 Arena in Dubai. Both men will be looking to make the transition from posing as fighters on Instagram to competing against an actual opponent in a ring.

There is some evidence that The Kazakh Titan, whose real name is Djumanov Almat Bakhytovich, can actually box. He shared some footage of himself hitting a dummy and didn’t look like a complete beginner.

There is no evidence that The Iranian Hulk has ever done any serious boxing training. He might have nearly 1 million Instagram followers, dwarfing his opponent’s tally of 29,000, but that won’t help him when he finally steps inside the ring.

Will The Iranian Hulk finally get exposed on Sunday? Or could he surprise fans by actually being able to box?

For Sajad Gharibi the moment of truth is fast approaching.