Yodkaikaew Fairtex looking to relaunch his MMA career at ONE: ‘No Surrender’ Part II

Yodkaikaew Fairtex is the latest Thai fighter to be offered a contract with ONE Championship. He returns to the sport of MMA after a two year absence this Friday.

Yodkaikaew is scheduled to face John Shink in a flyweight fight at ONE: ‘No Surrender’ Part II. He made his pro MMA debut in 2015 and says it felt like an obvious move at the time,

“I always liked to punch a lot in my Muay Thai fights and thought with the smaller gloves it will be easier to get the KO wins, I also love to train in all aspects of the sport so I wanted to try it out. It has not been difficult to switch from fighting Muay Thai as I love to train and fight and learn all the different sides of the sport.” He made his debut as an amateur but was disqualified after just four seconds after some confusion surrounding the rules and etiquette of the sport. Yodkaikaew was undeterred and prevailed in his first pro fight a few months later,

“I was nervous before the fight as I thought MMA could be dangerous. After the fight though I realized it wasn’t as dangerous as I thought it would be and I actually think Muay Thai is more dangerous, where you just stand in front of your opponent looking to trade hard shots. There is more to MMA with the ground game and I don’t think you take as much sustained punishment.”

His aggressive style made him an instant fan favourite with Full Metal Dojo. But Yodkaikaew was submitted by a Filipino in his second pro fight and puts this loss down to a lack of experience,

“I didn’t know enough about MMA during that fight and didn’t have the same team behind me then. Now we have DJ Jackson at Fairtex teaching MMA and my ground game has improved so much more now.” His next fight was against Topnoi Tigermuaythai, who would go on to become a big star with Rizin. At the time no-one could have predicted how much success either man would enjoy in MMA but Yodkaikaew emerged victorious, claiming a first round KO win.

In total he fought four times as a pro for Full Metal Dojo, winning three of those bouts. Next stop for Yodkaikaew was China with the Thai taking on some of the top fighters on the Kunlun roster.

He was matched with reigning flyweight champion Meixuan Zhang on his promotional debut. Kunlun Fight might have thought it would be an easy matchup for one of their starts but Yodkaikaew had other ideas and claimed a draw against the 18 fight veteran.

He competed twice more for Kunlun and went the distance in all three fights for the promotion,

“Fighting in China was a good learning experience for me. My last fight I lost on points, I lost out to takedowns because I was okay at defending them, but those he got he always managed to take the top position which cost me the fight,” he recalls. 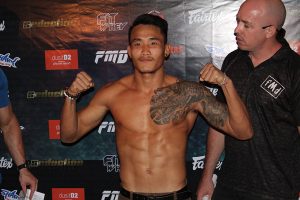 Yodkaikaew’s opponent on Friday is undefeated. But the Thai has been training alongside ONE Championship stars like Stamp Fairtex and Mark Abelardo at the Fairtex Gym in Pattaya.

Saemapetch Fairtex is also competing on Friday’s card in a Muay Thai fight and Yodkaikaew says his preparation has been perfect,

“I am really looking forward to the fight. We have been working really hard for this and we have a great team here at Fairtex so that makes the preparation so much easier.” 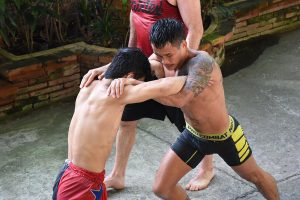 Yodkaikaew is a veteran of over 100 Muay Thai fights who has fought at both Lumpinee and Rajadamnern. He saw Dejdamrong Sor Amnuaysirichoke become the first man to hold the ONE Championship strawweight title and would like to follow in his footsteps,

“I am not looking forward too much yet, I just want to get stronger and improve every fight. Ultimately though my target would be to win a world title with ONE Championship.”

Competing against some of the top flyweights and bantamweights in China was a valuable experience for Yodkaikaew. He has learned from his losses and will be looking to relaunch his MMA career with a win at ONE: ‘No Surrender’ Part II.