Yuko Suzuki aiming to emulate her husband’s ONE Championship achievements

Hayato Suzuki earned a strawweight title shot with ONE Championship but lost his spot on the roster for medical reasons before he got a chance to challenge for the belt. But while he is pursuing other options his wife, Yuko Suzuki, has her sights set on earning a contract with the promotion.

Both started out as teammates at Kazukuki Miyata’s Brave Gym. They spent time together on the mats, started dating and eventually tied the knot in February, 2018.

The couple are so close that every time one of them fights the other will always be there in the corner. Yuko, who fought three times for ONE Warrior Series last year, says her husband has been a major influence on her career,

“When he’s fighting, I am there in his corner. When I am fighting, he’s there in my corner. We got each other’s back always in every fight. I am so thankful to have him in my life,” Yuko said through a translator. 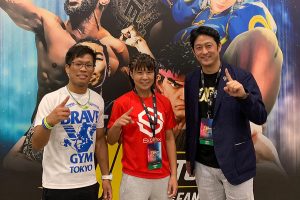 This close bond has helped them in their professional careers. Yuko says that together they can break down where they have gone wrong and figure out how to improve,

“The benefit of having a husband who’s also a fighter is I get valuable feedback on aspects that I need to improve. I also do the same when he asks me to critique his fights. It’s very helpful for both of us. We’re very lucky that we get to do that,” she said.

The relationship between Yuko and Hayato was put to the test when the latter was diagnosed with a cerebellar cyst. As a result he missed out on the opportunity to challenge strawweight champion Joshua Pacio at ONE: ‘Eternal Glory’, an opponent he had already beaten once.

With the possibility of enforced  early retirement looming Hayato needed her support more than ever,

“That was a tough time for us. You could see in his eyes the desire to fight but we couldn’t just disregard the possible repercussions without any approval from the doctor. As a wife, my duty is to keep him safe. I don’t want to lose him. I needed to do that for our relationship,” she recalled. 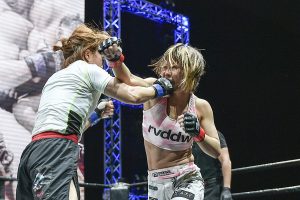 As an outlet for his frustration, Hayato focused on being one of Yuko’s coaches and training partners. She had come up short against So Yul Kim at ONE Warrior Series 4, dropping a unanimous decision to the Korean.

Yuko may be riding high on a streak of impressive wins, but it was still difficult for her to celebrate as she knew her husband was longing to compete himself,

“He’s a great coach, and he knows me too well as an athlete. When I win my fights, he’s genuinely happy for me. But you could see that something was missing in his life. He wasn’t ready to let go of his career and just be a trainer,” she shared.

After going through a series of tests and examinations, Hayato received his medical clearance, opting to start over again in Grachan where most of his matches in his eight-year mixed martial arts stint took place.

Hayato turned in a performance to remember in his return, submitting compatriot Ryosuke Kano with a rear-naked choke in the opening frame at Grachan 44 x Brave Fight 22 this past March.

Standing at the center of the cage beside an emotional Yuko, Hayato tried his best to hold back his tears while speaking on the microphone in his post-fight interview.

“Those were tears of joy. We thought that day would never come. For him being able to come back and win is such a beautiful moment. It is something that I will remember for the rest of my life. I also felt I won the fight,” Yuko remembered.

While Hayato is exploring his options as a free agent, Yuko has her sights set on a contract with ONE Championship. She believes that she might be a win away following in the footsteps of Kimihiro Eto, Mark Abelardo, Rockie Bactol, Lito Adiwang and Stamp Fairtex by going from OWS to the main show.

It leaves them both moving in opposite directions. While Hayato has reluctantly been forced to give up on his ONE Championship dreams Yuko’s ambition is to secure a spot on the roster herself.