Assessing Yuya Wakamatsu’s ONE Championship career is not a simple task. How much credit do you give him for causing Demetrious Johnson so many problems in a fight he eventually lost? How do you explain him dropping a decision to Danny Kingad before scoring a highlight reel KO against his team mate Geje Eustaquio?

Eustaquio is the more decorated of the two Team Lakay flyweights. Yet Wakamatsu knocked him out inside a round despite having laboured to a split decision defeat against Kingad in his promotional debut.

Wakamatsu probably won the first round against Johnson but ultimately the record will state that he lost that one by submission. It was a different story against Eustaquio and the 24 year old believes it is all a matter of timing,

“Fighting all comes down to moments in time. If I didn’t stay alert, Eustaquio would have caught me with his punches and kicks (but) my timing was good. I found a way in after one of his kicks, and the finish was good.” 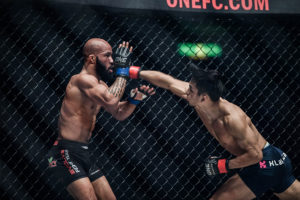 Next up for Wakamatsu is a bout against former bantamweight title challenger Dae Hwan Kim at ONE: ‘Century’. Having beaten a former champion last time out he is very confident of defeating the Korean,

“His style is not so different from Geje Eustaquio in my last fight, so the game plan is easy. He waits and looks for counters. He focuses on punches and his right low kick.”

Wakamatsu goes into specifics when detailing how he expects his opponent to approach this fight,

“I think he’ll look to exchange off my attacks. He might also go for a takedown off my punches and force a scramble. I don’t think he’ll come to me, he’ll wait for me to go first.”

Kim has several submission wins on his record. But the Korean comes from a Muay Thai background and Wakamatsu believes that will dictate his opponent’s approach to this fight,

“I honestly don’t think we’ll grapple. He can to take the back off scrambles, but I don’t think he looks for it. He’ll come to strike.”

It was his performance against Johnson that really opened people’s eyes to how much potential Wakamatsu has. He might have lost that fight but he won a lot of fans, as well as silencing the skeptics claiming that the former UFC flyweight champion would just walk through the competition ONE Championship has to offer.

Interestingly Wakamatsu believes he has improved since that performance. It’s difficult to argue with him, given the devastating fashion in which he finished another former champion in his next fight.

“I’ll show my evolution since fighting DJ. I won’t be knocked out, I won’t be taken down, I’m out to overwhelm him and I want the world to know I can win in any way.”

Wakamatsu believes this confidence could be key going into the fight with Kim. The 24 year old thinks the Korean will be unable to cope with his pressure and intensity and expects to register another emphatic victory on October 13th,

“I want him to see me coming to the cage on the day and realize he’s done for. I’m going to pressure and overpower him with a level of speed, power and technique that he’s never trained for. I have an answer for any of his attacks, striking or grappling.”