Agilan Thani out to claim a second Japanese scalp at ONE: ‘Century’

Agilan Thani knows what it is like to deal with high expectations. He became the first Malaysian to ever challenge for a ONE Championship title when he faced Ben Askren in 2017.

He also knows what it is like to deal with unrealistic expectations. In Malaysia people genuinely believed he would become the first fighter to ever defeat the former Bellator champion and multiple time NCAA Division 1 winner.

Thani fell short against Askren, getting submitted midway through the opening round. In 2018 he headlined two ONE Championship cards in his hometown of Kuala Lumpur, and was stopped in both fights.

He is 24 years old and has won nine fights out of 12 for ONE Championship. It’s an impressive achievement whatever way you look at it but the crowning glory was clearly Thani’s win over Yoshihiro Akiyama earlier this year. 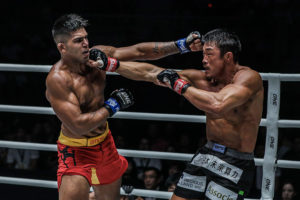 The UFC and Dream veteran was expected to walk through Thani but the Malaysian had other ideas,

“I had so much fear going up against Akiyama (because) he’s been in the game for a long time and his name is so big. Even in the hotel in China everyone was surprised that I was the man who was going to take on Akiyama. People who met me in the lobby were doubting me, but I knew I couldn’t doubt myself at the very least.”

Thani won by unanimous decision at ONE: ‘Legendary Quest’. But it was a completely one sided fight with the Malaysian dominating the Japanese fighter from start to finish.

It was a spectacular way to snap a two fight losing skid and Thani emphatically silenced the doubters with that performance. He credits life lessons with giving him the resolve to recover from setbacks in his fighting career,

“It took a lot of courage to come back. But then, I realized that I’ve been doing it (all) my life. I had to deal with a lot of issues even when I was a small boy and without the right mindset I would not be where I am today.” 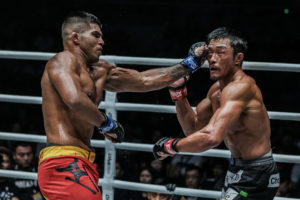 The Malaysian needed to show steel and resolve to even get his martial arts journey started,

“I went to work at Monarchy as a cleaner, and my dad did not like my choice. He asked me why I was working at a job which didn’t pay much and pointed out several jobs which paid more, and didn’t require me to work at odd hours,” he recalls.

However Thani was determined to follow his heart and pursue a path that involved training at Monarchy MMA as often as possible,

“I needed the courage to explain to my dad and just live with it. There is no fun in doing things which aren’t going to make you feel good about yourself and while I was working in Monarchy I felt very good about myself.”

Thani’s reward for defeating one legendary Japanese welterweight is a matchup against another. This time he is going up against UFC veteran Yushin Okami at ONE: ‘Century’. 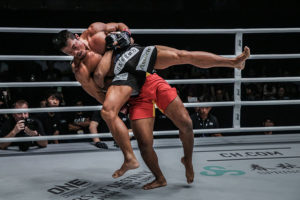 Thani will not be the favourite but he’s become accustomed to underdog status. In fact he feels like all the pressure is on his opponent,

“Everything is going to be on him. He’s coming off two losses, and he has to perform in front of the Japanese crowd. For me, this is a chance to test myself and I have nothing to lose.”

Okami might have lost two out of two since signing for ONE Championship earlier this year. But Thani knows how experienced his opponent is and will not be underestimating the veteran,

“You have to take everything into consideration because Okami has seen it all. Maybe in his past two defeats, he wasn’t ‘there,’ and he was not able to pull the trigger. It could change on 13th October.”

Thani has emerged as ONE Championship’s biggest star in Malaysia. But he has yet to hit the heights of success and popularity enjoyed by Demetrious Johnson, Eddie Alvarez and Angela Lee.

But the Malaysian will be rubbing shoulders with these superstars at ONE: ‘Century’ and, both as a fan and a fighter, he’s just excited to be part of the event,

“I’m excited just as everyone else around me is. I’m a fan of the sport, and I’m looking forward to enjoying the whole experience in Tokyo.”