Reigning atomweight champion Angela Lee now has an astute idea of which fighters on the roster could be in line for a shot at her belt. That’s because the official ONE Championship rankings are now available for all to see.

There’s been a lot of debate about who Lee should face next. Denice Zamboanga, the #1 ranked contender, was reported to have been promised a title shot.

But Lee suggested that Zamboanga’s teammate Stamp Fairtex could step up instead. The idea being that the Thai was a bigger name than the Filipina, due to her status as the promotion’s reigning Muay Thai atomweight champion.

Stamp isn’t ranked at present but Lee ran the rule over the five atomweights who are. These are her thoughts: 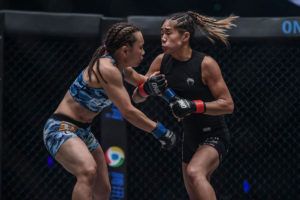 #1 ranked Denice Zamboanga is believed to be next in line for Lee. The Filipina’s rapid rise has certainly not escaped the attention of the champion.

The Fairtex fighter beat Jihin Radzuan at ONE: ‘Mark of Greatness’ and Mei Yamaguchi at ONE: ‘King of the Jungle’. She made both decision wins look easy and Lee was suitably impressed,

“She is a really good all around fighter, a really good mixed martial artist. I think she mixes it up in the trenches pretty well, and she can pretty much play anywhere.“

Zamboanga arguably looked more impressive against Yamaguchi than Lee did in either of her decision wins over the veteran. The 23 year old saw that performance as a strategic success,

“Judging her last fight with Mei, it was a really smart game plan that her team came up with, and she was able to execute, so I thought that was smart.”

Unless Stamp is allowed to jump the line this fight looks likely to happen sooner or later. Lee does not downplay the challenge that awaits,

“She looks like a tough girl, and one of those new breed of mixed martial arts fighters where she can mix it up and pretty much feel comfortable in any range.”

Meng Bo sits at #2 but has only fought once for the promotion. She finished former strawweight title challenger Laura Balin at ONE: ‘Age of Dragons’. Lee watched the fight and was impressed by the finish,

“I only saw one of her fights because she only had one fight in ONE Championship, but it was a nice knockout. I think she did a pull-three, like a pull into a hook. I thought it was impressive.” Lin Heqin occupies the #3 spot despite having only fought once for the promotion. She submitted Jomary Torres with a triangle choke at ONE: ‘Reign of Valor’.

With just two ONE Championship wins between them Lee wonders whether the two Chinese atomweights deserve to be ranked so high,

“I was actually surprised to hear those two fighters (Meng and Lin) were on the top five list for atomweight contenders. I just thought a few other fighters should be up there because they have had some more bouts and a longer history in ONE.”

Lee has fought #4 ranked Mei Yamaguchi twice. Both fights went the full five rounds and the champion was awarded the decision on each occasion, although many felt that the Japanese fighter could and possibly should have won both bouts.

So it’s no surprise to hear that Lee has plenty of respect for the #4 ranked veteran,

“I think Mei definitely deserves to be on the top five list. She is just a veteran of the sport, she has been doing this for a long time, and she has fought for a title and has stayed extremely relevant. She has had a lot of fights and yeah, I think she is well-deserving of being in the top five.” Gina Iniong is pregnant and won’t be fighting any time soon. She remains at #5 in the rankings for the time being and Lee says the Filipina deserves her spot,

“I also feel like Gina deserves to be in the top five. She has had quite a bit of fights in ONE, some ups and downs but she has stayed relevant and, based on who she has fought most recently, I think it definitely qualifies her for being in the top five.”