Christian Lee may only be 22 but he already boasts a stellar CV that’s packed with fast, explosive finishes.

It took the ONE lightweight champion just over a minute to dispense with Timofey Nastyukhin at ONE on TNT part II. That’s now 15 professional wins for the young phenom, with 14 of them coming via stoppage.

This was Lee’s second defense of his title since taking the strap from Shinya Aoki back in 2019. Bearing in mind that Lee also won the lightweight Grand Prix soon after, it’s fair to say that no other fighter has ever put together a body of work this impressive at such a young age.

Nastyukhin came into the fight with a dangerous reputation. The Russian famously knocked out Eddie Alvarez in 2019 and earned his shot at the title with a dominant decision win over fellow contender Pieter Buist late last year.

Lee saw an early takedown stuffed by Nastyukhin then stayed on the outside, biding his time and showing nimble footwork. The Hawaii native threw a high kick as he sought to find his range then threw a jab and continued to move well before unleashing a left hook that dropped the Russian.

Another left hook followed as Nastyukhin turned his back. Lee could smell blood in the water and went for the kill. More than ten unanswered right hands followed as Lee secured a statement win, his sixth straight. Shinechagtga Zoltsetseg suffered a DQ loss to Yoshiki Nakahara. The Mongolian had put together a run of four straight victories ahead of the fight, but referee Olivier Coste brandished the red card after Zoltsetseg delivered an illegal kick when both men were on the ground.

The incident took place late in the second round with Nakahara looking for a leg lock. Having tried to fight his opponent off with punches, Zoltsetseg then attempted to spin but kicked Nakahara in the head on his way around.

The shot did look intentional, and the 24-year-old offered an apology after the fight. The loss means he now falls to 6-3 with Nakahara climbing to 15-5. China’s Wang Shuo produced a stunning elbow to knock out Kim Kyu Sang in the third round. It was a stunning return for ‘The Little Whirlwind’ who first fought for ONE six years ago. Despite his absence from the promotion, he came into the fight on good form and riding a four fight winning streak.

Kim is very tall for a flyweight but Sang did well to attack the lead leg of the Korean with low kicks throughout the fight. In the third round, he seized his moment brilliantly, stepping in with a vicious elbow to the chin.

The 26-year-old ensured the victory with four more finishing punches as the referee waved it off. That win takes Wang’s record to 12-4 while Kim slips to 10-5. 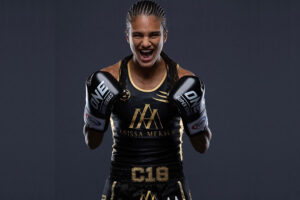