The Filipino fans were up in arms after Denice Zamboanga‘s controversial split decision loss to Seo Hee Ham at ONE: ‘Empower’ tonight. They thought their heroine had done enough to earn a spot in the semi finals of the atomweight Grand Prix.

This is the moment Zamboanga found out the decision had not gone her way:

The Filipina was shocked by the decision and she wasn’t the only one. Zamboanga had controlled large portions of the fight with her takedown orientated strategy.

Ham spent almost the entire first round defending a takedown. It wasn’t the most entertaining spectacle but Zamboanga was clearly getting the better of the action at this stage.

The Korean did start to let her hands go at the start of the second but soon found herself fending off another takedown attempt from Zamboanga who faked a straight right to set it up.

Ham was back on her feet soon but couldn’t shake Zamboanga off and spent more time pressed up against the cage, a position that was becoming very familiar. At the start of the third it was the Filipina pushing the pace with a head kick catching the eye without doing any actual damage. 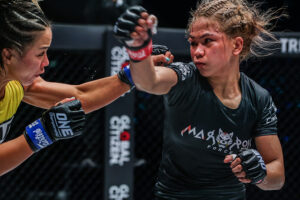 The most significant moment in the fight came when they clashed heads. Blood was pouring from Zamboanga’s forehead and it looked like the contest might be over.

But after a long delay Zamboanga was allowed to continue and she took Ham down instantly. Once again she didn’t do any damage, unless you count the blood that was pouring into the Korean’s eyes from her cut.

The fight finished with Zamboanga in top position and  decision win for the Filipino seemed a formality. But she ultimately paid the price for her cautious strategy with Ham getting the nod by way of split decision.

The former Rizin super atomweight champion gets her ONE Championship career off to a winning start and moves up to 24-9. Zamboanga drops to 8-1 and will doubtless have something to say about the decision in due course. In the other atomweight Grand Prix quarter finals Ritu Phogat (6-1) came from behind to beat Meng Bo (17-6) by decision. The Indian took a beating in the opening round but came back strongly to control the final two rounds with takedowns.

Itsuki Hirata (5-0) put on a judo clinic against Alyse Anderson (5-2). The undefeated Japanese star used trips, tosses or throws to take her opponent down in every single round and take the decision win.

Stamp Fairtex (6-1) got revenge over Alyona Rassohyna (13-5) and got back in the win column. She had to survive one armbar attempt but was otherwise untroubled by the submission game of the Ukrainian and it as a surprise when a split decision was announced.

All eyes at the Singapore Indoor Stadium were on the atomweight Grand Prix but there was also a title on the line. Xiong Jing Nan showed superior striking and stamina to take the decision over Michelle Nicolini. The only disappointment for the Chinese champion is that she couldn’t put the BJJ black belt away.

Xiong defended her strawweight title for the fifth time and moves up to 16-2. Nicolini drops to 6-2.