Eduard Folayang is coming off a morale boosting win over John Wayne Parr at ONE: ‘X’. That was a Muay Thai bout and the Filipino hinted he might continue to compete in a different sport.

It sounds like Folayang is in no hurry to resume an MMA career that had stalled in recent years. He is more interested in fighting mixed martial artists under Muay Thai rules and the first name on his lips is Sage Northcutt,

“I think it will be a good fight. It’s a win-win situation for us. He’s a striker, a karate champion. On the other hand I’m from wushu, and we’ll be fighting in a different world with Muay Thai rules. I think that is a good match for us. It will truly test our skills. I’m sure he loves a challenge, and I see this one as entertaining.” If he does end up returning to MMA than Folayang would like to fight fellow veteran Yoshihiro Akiyama,

“Maybe we can bring in Akiyama. He really performed well against Shinya. It’s (almost) identical to the way I beat Shinya. I think this is a good match to make. We were supposed to face each other before but it got canceled. If it happens, it will definitely be explosive. The crowd will definitely be on their feet.”

Having faced another ageing legend at ONE: ‘X’ the Filipino sounds keen to continue with these type of fights,

The win over Parr was as impressive as it was unexpected. Few gave the Filipino a chance as he was fighting under an unfamiliar ruleset against an opponent who has been competing in Muay Thai for nearly four decades.

He was just happy to have the opportunity to face such a high profile opponent on his Muay Thai debut, 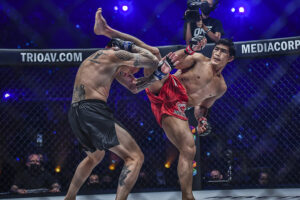 In the end it proved to be quite a comfortable win for Folayang although he did eat a flying knee to the face in the final round. The audience at the Singapore Indoor Stadium enjoyed the fight and it was a good moment for the Filipino,

“I was in disbelief. I thought to myself, ‘finally I was able to break my skid, and I was able to give a good fight’. Especially since the people in attendance were all standing up, they were cheering, and it was definitely noisy. At the back of my head, I knew that I made it. And this is great for me, momentum-wise.”

Folayang was able to knock the Australian down in the second round. It gave him a commanding lead on the scorecards and the Filipino says he learned some Muay Thai lessons from studying his opponent,

“One thing that I learned from JWP is his finishing instinct. For as long as you have time, you try to finish your opponent and go all-out. It’s something that I can take from him moving forward.”

The last time Folayang finished an opponent in an MMA fight was 2016. But the former ONE Championship lightweight king rolled back the clock with this performance and demonstrated that he is far from finished.

He could returns to MMA or try and build on his recent Muay Thai success. But whatever lays in store for the 37 year old Eduard Folayang is well and truly back.