Yoshihiro Akiyama wants The Korean Zombie to join ONE Championship!
By: Andrew Whitelaw  | April 7, 2022 8:05 am

Yoshihiro Akiyama wants The Korean Zombie to sign with ONE Championship! He is hoping to help the promotion put on its inaugural event in South Korea.

Speaking to Sports Keeda recently he reeled off a list of potential signings,

“In my mind there are three names. The Korean Zombie, Dong Hyun Kim who is still under contract with UFC, and ‘Mr Perfect’ (Kyung Ho Kang) who is also still with the UFC. I want them to sign with ONE Championship. This is another target of mine.” 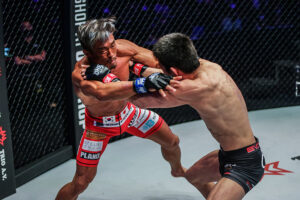 Akiyama comes from Japanese / Korean heritage and has represented both countries in international judo competitions. While ONE Championship has put on three events in the former there has yet to be a show in the latter.

It is a situation Akiyama would like to change and he dreams of bringing ONE Championship to Korea and signing several UFC stars to compete on the card, He is coming off a huge win at ONE: ‘X’. Expectations were low for the 46 year old who was dropping down a division to take on the two time lightweight champion Shinya Aoki.

There was bad blood between the two men with Shinya Aoki up front about the fact that he did not like the veteran. Akiyama had not exactly taken ONE Championship by storm either, winning one fight in three years.

He also had to endure a torrid opening round where Aoki spent the best part of five minutes working for a submission. But Akiyama turned the tide in the second stanza, overwhelming the former Dream lightweight champion with his aggression. Akiyama made his MMA debut in 2004 and is a veteran of 25 fights who has also competed in numerous international judo tournaments and competitions winning gold at the Asian Games and Asian Championships. But he describes the win over Aoki as the ‘happiest’ moment of his career,

“It was the happiest moment in my martial arts career. I haven’t talked to Aoki yet. But I got a victory because I had an opponent like Aoki. So I really appreciate it and Aoki is my hero.”

Having beaten him convincingly, Akiyama appears to be ready to make peace with Aoki. It will be interesting to see whether the feeling is mutual!