Eko Roni Saputra is coming off back to back wins in the ONE Championship cage and confidence is clearly flowing through the veins of the Indonesian. He has set his sights high and is hoping to face a former champion next.

The 29 year old started MMA relatively late in life. He only made his pro debut last year which might explain why he is in a hurry to face fighters in the upper echelons of the division,

“Geje Eustaquio has faced my Evolve teammate Kim Kyu Sung and he is strong in striking, while I am a ground fighter. I hope to be able to face him someday. If I win, my ranking will improve because he is a former champion,” he said.

With risk comes reward. A win over a fighter with Eustaquio’s reputation and former achievements would establish Saputra as an immediate title contender in the flyweight division.

Even if the Eustaquio matchup doesn’t materialize Saputra sees no shortage of potential opponents in the flyweight division,

“I think my team has eyes on that (Geje Eustaquio) bout as well, but I know I am new in ONE, and there are many challenges I have to overcome first. Flyweight is the division of hell.”

The transition from wrestling to MMA has not been entirely straightforward for the Indonesian. He was stopped by Niko Soe on his pro debut at ONE: ‘Roots of Honor’.

He bounced back to stop Kaji Ebin at ONE: ‘Dawn of Valor’ and Khon Sichan at ONE: ‘Warrior’s Code’. Saputra thinks this shows he has developed a more sophisticated understanding of the sport since his debut,

“I have begun to understand mixed martial arts techniques. I keep sharpening my skills (and) I am ready.” 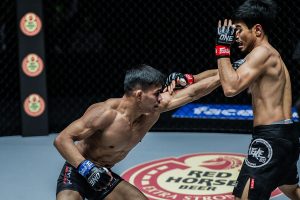 Saputra is based in Singapore but is unable to train at Evolve MMA at the moment. Like everyone else in the country his exercise options are limited but the Indonesian is staying in shape,

“The ongoing situation has affected my training as I can’t go to the gym, but I try to stay fit by exercising every day to maintain my physical condition,” he said.

When the Indonesian will be able to compete again remains to be seen. But he believes his next opponent could be Canadian Gary Mangat,

“Before they were postponed, I was told to prepare for the Jakarta and Singapore events, and I predicted I’d be matched against Mangat,” he says. 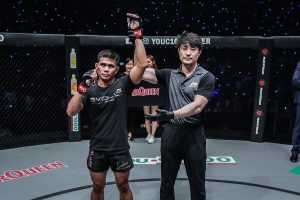 Saputra might come from a wrestling background but having been sopped with a standing elbow on his debut he wants another chance to test himself against a striker,

“Mangat is a striker who loves to throw punches and kicks (but) I like facing a striker because here at Evolve there are many strikers. Nong-O Gaiyanghadao and Sam-A Gaiyanghadao help me with that. They want me to kick and punch as hard as possible,” he said.

It sounds like Saputra has done his homework on Mangat. He is very confident he can triumph against the experienced flyweight,

“I can’t predict the outcome (because) all fights are unpredictable but think I can get a positive result.”

With ONE Championship having recently completed a flyweight tournament most of the top contenders in the division are coming off a loss. Either Adriano Moraes of Demetrious Johnson will be in a similar situation after their upcoming title bout.

It could be an opportunity for an up and coming prospect to put together a winning run and earn a title shot. That seems to be the plan for Saputra and he wants an opportunity to prove himself against some of the promotion’s top flyweights. 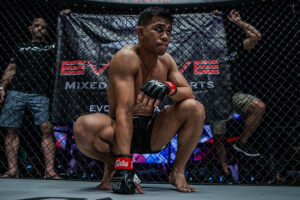