Manel Kape is returning to Asia. The former Rizin bantamweight champion has been added to the UFC 275 card in Singapore next month and will take on Rogerio Bonterin.

Kape (17-6) pulled out of his most recent fight at the last minute after failing a USADA drug test. He tested positive for a Turinabol metabolite but appears to have been exonerated.

He has not had to wait too long for another opportunity. The 28 year old will be going in search of his third straight UFC win when he faces the Brazilian.

After losing his first two UFC fights by decision Kape seems to have recapture the form which made him such a star with Rizin. He stopped Ode Osbourne with a flying knee at UFC 265 and then finished Zhalgas Zhumagulov with punches at UFC Vegas 44.

🇵🇹@ManelKape puts away Zhumagulov with a blistering finish! #UFCVegas44 pic.twitter.com/hasXe84kZS

The Brazilian withdrew from that contest citing an ankle injury. Since then he has had mixed success, beating Matt Schnell at UFC 262 but losing to Kai Kara-France at UFC 259 and Brandon Royval at UFC Vegas 46.

There were extenuating circumstances behind his two most recent defeats. He was dominating Kara-France until getting dropped with a faceplant KO and the defeat to Royval only came by way of split decision.

CHAOS at the APEX as 🇳🇿 @KaiKaraFrance drops Bontorin to close the show! #UFC259 pic.twitter.com/BtabcqGMtd

As previously announced the event will feature two title bouts with Glover Teixeira defending his light heavyweight title against Jiří Procházka in the main event. The Brazilian won the title at UFC 267 in Abu Dhabi last year while the Czech was the Rizin 205lbs champion.

In the co-main event Valentina Shevchenko will make her seventh defense of her UFC flyweight title and look to extend her eight-fight win streak. She has been matched with Taila Santos who earned her title shot with four straight wins.

A strawweight rematch has been added to the UFC 275 card. Weili Zhang and Joanna Jędrzejczyk will be running back one of the best women’s fights of all time at the Singapore Indoor Stadium on June 12th.

Zhang will be looking to bounce back after successive defeats. Both came in title fights against Rose Namajunas and the most recent was a highly debatable split decision.

Jędrzejczyk has not fought since that five rounder with Zhang at UFC 248 in 2020. She lost by split decision but picked up a $100,00 USD bonus for her efforts.

Two years ago today, one of the best fights in UFC history went down between Zhang Weili and Joanna Jedrzejczyk 👏 pic.twitter.com/0LRTBT5DXY

Meanwhile Kyung Ho Kang has a new opponent at UFC 275. The Korean bantamweight had originally been scheduled to face Saimon Oliveira but that bout appears to have been scrapped and instead he will be taking on hard hitting Mongolian Danaa Batgerel.

The event will be a pay per view and looks set to take place in the early hours of Sunday morning in Singapore. The start time is listed as 6am local time. 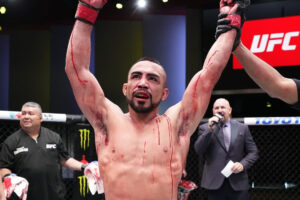