Marat Grigorian faces Chingiz Allazov in the main event of ONE: ‘Only the Brave’ next Friday. He already holds a win over reigning featherweight champion Superbon Banchamek,

The fight with Allazov serves as the semi final of the featherweight tournament. A spot in the final is on the line and the tournament winner will get a shot at Superbon.

Grigorian would like to remind people that he needed less than 30 seconds to knock Superbon out the last time they met,

“Of course he is one of the best fighters in the world but not ‘the’ best because I knocked him out in one minute!”

He enjoyed Superbon’s win against Giorgio Petrosyan at ONE: ‘First Strike’ and, just like everyone else, admits he was surprised by the outcome,

“It was a nice fight, very interesting, I did not expect it to happen like it did, but it was a very nice KO and Superbon managed to really surprise Petrosyan with that kick.”

In the Covid-19 era disruption has become part and parcel of everyday life. But Grigorian has had no issues and says his training camp has been ‘perfect’,

“My preparation as always has been perfect. We are ready to fight and put on a great show and war for the fans and I am very confident I will be the winner of this fight!” 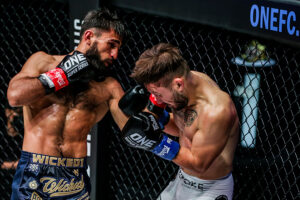 Grigorian has fought Sittichai four times and won the most recent of those fights. He fully expects to face the Thai fighter again in the final,

“I expect Sittichai to win the fight, but (Davit) Kiria showed a great performance in his last fight against Enriko Kehl and he can come with a surprise from all angles, so I also expect it to be a very interesting fight.”

Grigorian has spent 21 rounds inside the ring with Sittichai so far but has never faced Kiria. The Armenian might be hoping for a new challenge but he says he doesn’t care who he faces as long as he is in the final,

“As for who I want to face in the final if I get through? To be honest I don’t really care! I will be prepared for whoever they put in front of me. I want to show I am the best now.”