Marat Grigorian faces Andy Souwer in the quarter finals of the featherweight Grand Prix this Friday. The 30 year old has already won tournaments with K-1 and Kunlun so this is familiar territory.

But Grigorian knows the competition in this particular tournament will be intense with ONE Championship having signed up most of the top fighters in the division. He faces the two time K-1 Max winner in the opening round and warns that ‘anything can happen’,

“It’s a fight and anything can happen. He has a lot of fighting experience, so I don’t underestimate him, he’s still dangerous just watch. It can happen any second.” Souwer is clearly not in his prime but the same could not be said for Grigorian. He was the reigning Glory 154lbs champion when he signed for ONE Championship and his only recent losses came at the hands of Sittichai Sitsongpeenong.

The Armenian has been in with the best in the business but says this is the sort of fight that makes him motivated,

“When it’s a good opponent, you’re sharper, you are more excited to do your best. Sometimes, when you’re a little bit (over) confident, you make some mistakes in the fight and that would be dangerous.” Souwer’s legendary status in the sport is something that opponents are well aware of. Grigorian welcomes the opportunity to fight against someone who was one of the best in the business during kickboxing’s glory days in Japan,

“Souwer is a good fighter. He has had many, many fights. He’s a legend, and I’m happy to be fighting against him,” he said.

Despite the Dutchman losing two out of his three ONE Championship fights Grigorian does not see any holes in his opponent’s game,

“He’s still dangerous, he’s still sharp, and he’s still doing good fights at a high level. He’s a complete fighter that can do everything well.” 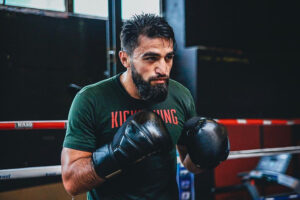 Grigorian had no such issues on his ONE Championship debut. He finished Ivan Kondratev in the second round but definitely won’t be complacent heading into his second fight,

“Like I told you, anything can happen in a fight. You’re supposed to be sharp because it’s a very high level that we’re fighting in. One second, one blink can be the end of a fight.”

And while Grigorian isn’t getting ahead of himself he definitely isn’t short of confidence. He knows that the competition is strong but the Armenian’s message for his rivals is simple,

“They’re all dangerous. But I’m coming to break them.”