From Christian Lee and Angela Lee in ONE Championship to Kai Asakura and Mikuru Asakura in Rizin, there are numerous sibling success stories in Asian MMA. A competitive spirit can often be kindled in the family home, and this was definitely the case for Ritu Phogat.

Everyone knows that Phogat and her sisters would become wrestling stars, and the subject of a blockbuster Bollywood movie. But the 25 year old, who fights at ONE: ‘King of the Jungle’ on Friday, feels her family gave her the discipline she needs to succeed as a mixed martial artist,

“I started training with them when I was 7 or 8 years old. My father would ask my sisters to do sit-ups and I would be in charge of counting the repetitions. Whenever my father would walk away for something, they would cheat and I would tell my father about it.”

It worked both ways and Phogat says her two older sisters would be hard on her, too,

“They used to scold me if I had done something wrong. I used to feel bad about it but I understood that it was for my own good,” she says. 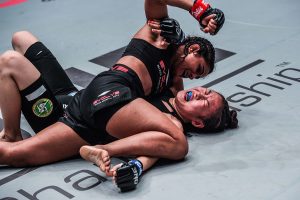 Phogat, who faces Wu Chiao Chen at the Singapore Indoor Stadium on Friday, says she was inspired to emulate the achievements of her older sisters,

Having followed in her sister’s footsteps for so many years Phogat is now blazing her own trail. She is the first member of the family to take up MMA, and make a successful debut at ONE: ‘Age of Dragons’.

Phogat admits some members of her family were concerned but says she had their full support in deciding to relocate to Singapore to pursue her MMA dreams,

“My whole family supported me in this transition. They noticed that I have a keen interest in mixed martial arts, so they never questioned my decision and fully supported it. Geeta was a bit nervous initially but she trusted me to pursue it with 100% dedication.” 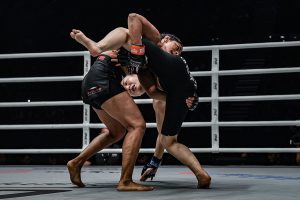 Coming from a wrestling background Phogat is a relative newcomer to striking style sports. But she has relocated to Evolve MMA in order to work on her weaknesses and become a truly well rounded mixed martial artist.

She only needed one takedown to beat Kim Nam Hee at ONE: ‘Age of Dragons’ but would like to showcase her striking the second time around,

“I will try to use my striking to the fullest and win this by knockout. I have trained every day and am working a lot on my striking, I have improved a lot.”

“I have watched a few videos of her matches but I have not made any special game plan for her,”

ONE Championship’s ambitions in the Indian market have been well documented. Phogat could potentially spearhead the promotion’s expansion there and she could be joined by some familiar faces,

“After my first bout, my sisters are taking a lot of interest in mixed martial arts.”

Fighters from India haven’t exactly taken the MMA world by storm so far. But you don’t have to look hard to find examples of wrestlers successfully making the transition.

After having followed the path set out by her sisters for so long Phogat is hoping to do something no-one in her family has ever done before,

“My dream is to give India its first-ever mixed martial arts world champion.”