ONE: ‘Empower’ is set for Singapore on May 28th and the all female fight card will feature the quarter finals of the atomweight Grand Prix. Former Rizin 108lbs champion Seo Hee Ham has been matched with #1 ranked Denice Zamboanga in the pick of the ties. 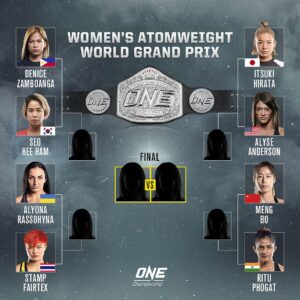 Ham (23-8) is riding a six fight winning streak that saw her win the Road FC 105lbs title and the Rizin 108lbs title, beating some of the best fighters in the division in the process. The UFC veteran will be making her promotional debut in May.

Zamboanga (8-0) established herself as the #1 contender by beating the likes of Mei Yamaguchi and Jihin Radzuan. But she has been matched with the tournament favourite in the opening round.

The winner will face either Stamp Fairtex (5-1) or Alyona Rassohyna (13-4) who rematch in the other quarter final. One the other side of the bracket Ritu Phogat (4-0) faces Meng Bo (17-5) while Itsuki Hirata (4-0) has been matched with promotional newcomer Alyse Anderson (5-1).

In the main event Xiong Jing Nan (15-2) will be defending her strawweight title against Michelle Nicolini (6-2). The Chinese fighter has held the title for three years while the Brazilian was last seen scoring a decision over Angela Lee at ONE: ‘Masters of Destiny’ in 2019.