Denice Zamboanga will be cheering for Wondergirl

Denice Zamboanga made her name fighting out of the Fairtex Gym in Pattaya. She took the ONE Championship atomweight division by storm while training in Thailand.

But with teammate Stamp Fairtex also competing at atomweight the Filipina decided the time had come to seek out pastures new. She has found a new camp in Bangkok but still has fond memories of her time at Fairtex.

Wondergirl Fairtex is fighting tonight at ONE: ‘Fists of Fury’ and Zamboanga says she will be cheering for her friend and former training partner,

“I’m super excited for this fight. I always enjoy Nat fighting, she’s such an exciting fighter. I will always support her,” she said. Zamboanga will never forget the time she spent living and training with Stamp and Wondergirl,

“We are very close friends. We used to be roommates back then. We would always share love and food stories, good fun times. She’s my food buddy and Thai teacher, I love her. I miss spending time with her and Stamp.”

But she is currently preparing for the upcoming atomweight Grand Prix at a a new camp in Bangkok,

“Right now I’m just enjoying my time here training with my new team here at Marrok Force. It’s good to have this solid support system by me all the time. We help each other get better and improve, and we’re always in shape because that fight offer could come at any time,” she said. 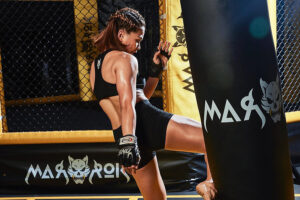 It looks set to be a busy year for Zamboanga. The atomweight Grand Prix will get underway in May but the tournament winner is tentatively scheduled to face Angela Lee in November.

That would mean four fights in six months for the winner and Zamboanga is excited about what 2021 might have in store,

“I’m excited this year because there are a lot of possibilities. I’m really motivated to take my career to the next level. To all my fans in the Philippines, thank you for the love and support. I appreciate it and I promise I will do my best in every fight. Let’s get that world title this year.”

She will be watching Wondergirl’s fight from Bangkok and expects the Thai to defeat Fil-Am newcomer Jackie Buntan,

“I have to go with Wondergirl in this one. I will always support her in and out of the ring. That will never change,” she said. 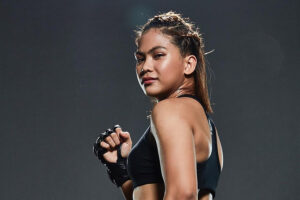 Wondergirl is expected to follow in Stamp’s footsteps by transitioning to MMA. Zamboanga thinks her friend has the right qualities to succeed,

“I know she’s constantly improving every aspect of her game in every camp. I know her hard work and dedication.  She is a very strong and very dedicated fighter. Her work ethic is exemplary. She always comes into camp motivated. As a fighter she’s long and athletic, and packs a lot of power,” said Zamboanga.

If Zamboanga does end up facing Stamp then Wondergirl could well be in her opponent’s corner. But for the time being they are all friends and she will be cheering for the Fairtex fighter tonight.