Another Tenshin Nasukawa fight, another mismatch. Koji is not a bad fighter, but he has been beaten by at least 13 opponents and there is nothing to suggest he has what it takes to dethrone kickboxing’s would be king.

The story is the same with every Tenshin fight and it’s getting boring. Everyone knows he will win, but people tune in anyway on the off chance he can pull out some sort of spectacular spinning strike.

Assuming Tenshin emerges from his assignment at Rizin 24 intact, and I think that’s a fairly safe assumption. He is slated to face a 37 year old on a three fight losing streak at Rise in November. 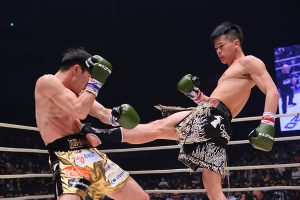 Tenshin turns 23 this month and should be in his prime. It is possible that he will be able to continue competing at his current level for another decade but it is not a given, a lot of Muay Thai fighters and kickboxers peak in their early 20s.

Rui Ebata, who he beat at Rizin 20, was a respectable opponent. Tenshin absolutely destroyed the former Rajadamnern 122lbs title challenger, proving conclusively that he is ready to face the best in the world at his weight.

Of course Covid-19 makes matchmaking tricky. There are plenty of fighters in Thailand who could cause Tenshin problems with Rodtang Jitmuangnon being the name that springs immediately to mind. But it’s not like there aren’t better fighters than Koji currently in Japan. On November 3rd, two days after Tenshin is scheduled to face aging journeyman Yuki, two of the top ranked kickboxers in his division will face off.

Takeru is slated to face Leona Pettas at the K-1 World Grand Prix. Two of the top three flyweights on the planet face of off just 48 hours after Tenshin fights an opponent who has won four of his last 12 fights.

By putting together this fight K-1 has proved that it is possible to put together top level kickboxing bouts when Japan’s borders are shut. But Takeru is with a serious kickboxing promotion with a strong roster, whereas Rizin seems content to throw Tenshin softball fights just to get him on a card.

There is no depth at all to Rizin’s kickboxing roster. The promotion doesn’t seem serious about the sport and there is no suggestion ONE Championship has had competition from Japan as it snaps up the likes of Davit Kiria, Petchtanong Benchamek, Superbon Banchamek, Sittichai Sitsongpeenong and Marat Grigorian.

Tenshin is completely overwhelming outmatched opponents in Japan while Rodtang is going up against the best pound for pound Muay Thai fighters on the planet every month in Thailand.

Both men are the same age. But only one of them has proved himself against the best fighters in the world at his weight.

Tenshin needs to decide what he wants from his career.  If the 22 year old continues on his current trajectory he will make a lot of money and retire undefeated.

But he can never be compared with a Japanese legend like Masato who consistently fought the best kickboxers of the era. While Rodtang and Takeru are in the process of proving their greatness Tenshin  is allowing his to slip away with a series of soft matchups that do his career no credit.