Underdog Rocky Ogden wants to pull off the upset at ONE: ‘King of the Jungle’

Rocky Ogden will becomes the latest Australian talent to showcase his skills on the ONE Super Series tomorrow night.

The Australian has been handed a title shot on his debut at ONE: ‘King of the Jungle’. But he will need to beat one of the most decorated fighters on the roster to claim the strawweight Muay Thai belt, standing opposite him will be multiple time champion Sam-A Gaiyanghadao.

Ogden has already amassed 42 fights in his career, with 25 of of them in Thailand. He has fought at both Rajadamnern and Lumpinee, winning the WPMF 118lbs title at the former stadium when he was just 17 years old.

He has been given a very tough test for his debut but Ogden isn’t fazed by the challenge though and is looking forward to competing on the ONE Super Series,

“ONE recognized my talent and contacted me to fight Sam-A for the title. I was very excited and there was no way I could turn down the opportunity. I am very happy and excited to have the opportunity to fight for ONE as they are the leading martial arts platform today.” 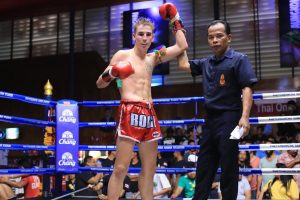 Although most people will have him as the underdog for the fight Ogden is very confident in his own abilities and is not travelling all the way to Singapore just to make up the numbers,

“Most people are the underdog when fighting Sam-A, I don’t mind, people doubting me just gives me so much more motivation to prove everyone wrong and show them what I have to offer. I’m not just another contender facing Sam-A, I am going in there to win.”

Ogden has a lot of respect for his veteran opponent but the 20 year old believes he can win,

“I’ve watched Sam-A for many years now, he has a very good left kick and is very fast. Of course you have to respect the man and everything he’s done in the sport, but I believe I am stronger and better and will show that on the 28th.”

Ogden already has experience fighting in the smaller MMA gloves back home in Australia on John Wayne Parr’s Caged Muay Thai (CMT) promotion and in Thailand on MX Muay Extreme and has no qualms about wearing them,

“I have fought in MMA gloves twice and I like them, opens up many holes in your opponents defence and gives more room for punches to sneak through.” Comparisons between Ogden and  Australian legend John Wayne Parr have already been drawn. The 20 year old fights out of JWP’s gym and both have spent a lot of time training in Thailand,

“I have known JWP for a few years now and have been training at Boonchu when I’m not in Thailand. I am very happy to now be at Boonchu gym permanently taking on the world, I am confident in my team and what we are doing.”

The young prospect already knows what he wants to achieve in the sport,

“I still have the same goals from when I started out and that is to be as dominant as I can be and keep building my legacy. We will keep doing our thing and see what big fights come and take them depending on what they have to offer.”

Parr was quick to acknowledge the similarities between their respective career so far and is very confident in his protege’s abilities and potential,

“Since I’ve met Rocky and found out about his history, I would have to say he is the closest Aussie to have walked in my footsteps. Just like myself Rocky moved to Thailand when he was 16 for four years living in Thailand fighting at Rajadamnern Stadium, Lumpinee Stadium and all over Thailand. Rocky even won his first world title on the Prince’s birthday live on Thai TV. As far as I can tell Rocky lives for Muay Thai. Long as he can keep his passion & focus the sky’s the limit.”

Parr is also under no illusions at the task in front of them, but is confident that they have a big chance to shock the World and only sees the fight as a win-win for his young warrior,

“We have a game plan for the fight. Sam-A is southpaw so straight away it’s a slight disadvantage for us, but we have been working hard in the gym to make sure all our bases are covered. We have a lot of respect for Sam-A and understand It’s a very difficult fight, but our advantage is the MMA gloves. If Rocky can land a hard punch it could change the tide of the fight in one shot and if we hurt Sam-A we will do our best to capitalize on that.”

Parr also wants his protege to go out and entertain. Regardless of the outcome he hopes Ogden will put in a performance to remember,

“The best thing about Rocky is he understands how important this opportunity is to fight a legend. If he wins he shocks the world, but even if he doesn’t win, but puts up an exciting fight, what better way to introduce yourself to the fans of ONE Championship?” 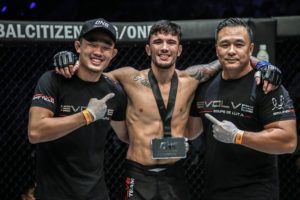 Bruno Pucci faces Kwon Won Il at ONE: ‘Inside the Matrix’ Part IV

Kiamrian Abbasov faces James Nakashima at ONE: ‘Inside the Matrix’ Part II