Scotland’s Chris Shaw will be looking to make his mark on the ONE Super Series when he takes on Thailand’s  Rodlek PKSaenchaigym at ONE: ‘Fire & Fury’ this Friday.

Shaw was originally due to face Rodlek at ONE: ‘Dawn of Heroes’ which was set for the same venue last August but a catalogue of problems led to him being replaced by compatriot Andrew Miller.

Shaw was devastated to miss out on such a big opportunity and describes it as a ‘nightmare’ situation,

“It was a nightmare lead up to the original fight but I was adamant I wasn’t pulling out,. I was in hospital on IV antibiotics for about a week with cellulitis in my knee which I got from a bite and then training when away on holiday and to the point I couldn’t bend my leg.”

Most fighters would have pulled out at this stage but the Scot was determined to continue,

“I only had a week until I left for Thailand when I got out of hospital and tried to squeeze in a quick training camp but it didn’t matter as long as I could stand I was fighting.” However a combination of ONE Championship’s notoriously stringent medical testing and a training accident would ultimately KO the Scotsman,

“Then there were some issues with my original MRI scan that I got in the UK. We flew to Thailand and arranged to have tests done there, but then I also picked up a cut on my eye whilst clinching. We got the tests done and got the all clear with the MRA and MRV but it was just too late for them which I understand, it was a big show and they had to make sure they had the card sorted.”

Having been determined to press ahead with the fight Shaw was obviously disappointed. But he also accepts that he would have been well short of his best,

“It was just tough to take after going to Thailand and coming through everything. But in hindsight, it was the worst possible camp ever and against a solid opponent, so maybe it wasn’t meant to be.” 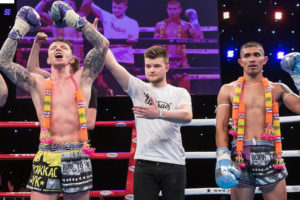 Shaw has already come up against strong Thai opponents before, dropping a decision to Superlek Kiatmoo9 on Yokkao 27. It was a fight that showed his heart and determination as he battled on despite a nasty cut on his forehead.

Next saw a match against Rambo Petchportoror on Yokkao 38. The Thai veteran has beaten Petchpanomrung Kiatmoo9, Rafi Bohic and Muangthai PKSaenchaigym but Shaw again showed the grit and determination seen in the Superlek fight to win by majority decision.

It is a memory Shaw looks back on fondly,

“Rambo was another big fight for me, he’s got a good reputation in Thailand and I was ready to go from the first bell and put it on him, I wasn’t getting caught on my heels again like the Superlek fight. I was well prepared and had a solid gameplan and the result was a dominant win, loved that fight!”

Shaw is under no illusions as to the task in front of him on ONE: ‘Fire and Fury’, but has a strong team behind him with the vastly experienced Gary O’Brien of Boxfit Glasgow and the Power of Scotland team. They studied Rodlek extensively and Shaw is familiar with his upcoming foe,

“We’ve studied Rodlek as we do with every opponent. Gary and I then come together and discuss their strengths and weaknesses, patterns and combinations etc and then look at my best weapons and strategies to use. He is very dangerous, strong boxing and low kicks, where he isn’t looking to score, just smash your leg so you are a stationary target and he can punch your head off.”

Rodlek stopped England’s Liam Harrison at ONE: ‘Legendary Quest’ and Shaw has learned lessons from studying that footage,

“He had an amazing fight with Liam Harrison and to be honest that could have went either way, it was just who landed those big shots first. But Liam’s style was perfect to showcase Rodlek at his best, I’m not going to fight him like that.” Shaw knows what he needs to do to win but is aware that one mistake could prove fatal. He even gave a few tips to the fighter who replaced him in the Rodlek fight last August,

“I actually told Andy Miller some of my gameplan before he took my place and he showed that avoiding that midrange makes him far less dangerous, but then he had a lapse in concentration and paid the price and it only takes that one shot from Rodlek. So I have a plan and I have to be bulletproof and concentrate throughout. Be perfect for 9 minutes!”

Shaw knows he has yet to earn the same sort of fearsome reputation his opponent has. But he sees this as the perfect opportunity to do just that,

“I’m not under any illusion, I know it’s a tough fight, I know I’m expected to lose, but I always shine the most as the underdog. I’m winning that fight and if I don’t it’s because I made a mistake, I have all the tools to beat him, he’s dangerous but one dimensional and I’ll be kicking myself if I don’t leave with my hands raised!”

Another British fighter to make a big impression on the ONE Super Series is Jonathan Haggerty. He showed that there are fighters who are completely unknown in Thailand but capable of beating the biggest names in the sport.

“My goals in the sport are really centered on this run in One just now, that’s my focus and I want that belt, it can happen quick, just have to look at how quick Haggerty became champ after impressive wins. So I want to get a couple of good wins and get my shot! I know I’m going to get flung to the wolves, in the past year I said I would fight Gulabdam, Neunglanlek and obviously Rodlek, so I’ll have earned it but I will fight any of them!”