Takasuke Kume unified the lightweight King of Pancrase title on Sunday after submitting Tatsuya Saika with an armbar at Pancrase 325 in Tokyo.

Kume was making his return to the promotion following stints in both ONE Championship and Rizin. He scored a unanimous decision against Koshi Matsumoto at ONE: ‘Century’ part II, racked up a split decision against Satoru Kitaoka at Rizin 24 but was outpointed by Koji Takeda in his last outing at Rizin 27.

Saika came into the fight on the back of a five-fight winning streak. The 31-year-old was crowned the interim lightweight King of Pancrase in the main event at Pancrase 318 when he knocked out Genpei Hayashi in the first round back in September of last year. Kume began the fight circling on the outside before scoring with a double leg takedown. Saika was able to find his feet and drive his opponent towards the cage wall.

After returning to the centre, Saika was able to secure a takedown of his own and had several submission attempts as he sought to lock in a kimura and a twister as all three judges scored the round in his favour.

But Kume is a wily veteran and turned the tide in the second round. The 36-year-old from Nagoya took Saika down and forced him up against the side of the cage. From there, he moved towards the back and tried to lock in a rear naked choke. Saika was able to escape but soon found himself in deeper trouble.

Kume seized his opponent’s left arm and locked in the armbar, with the tap coming at 2.28 of the second stanza. This was the third defence of his lightweight belt as he unifies the title and extends his record to 25-7-3. Saika falls to 7-2. The evening’s other title fight saw ONE Championship veteran Daichi Kitakata (19-10-1) retain his strawweight belt with a third round TKO against Yuta Miyazawa (9-4). 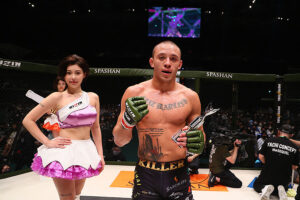